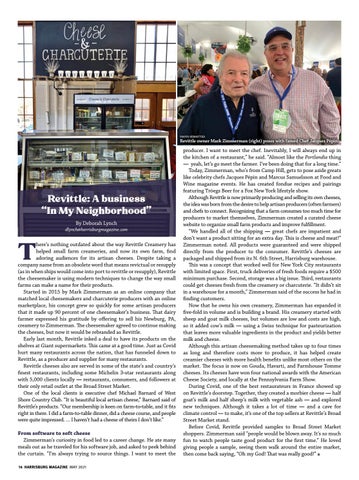 Revittle: A business “In My Neighborhood” By Deborah Lynch dlynch@harrisburgmagazine.com

here’s nothing outdated about the way Revittle Creamery has helped small farm creameries, and now its own farm, find adoring audiences for its artisan cheeses. Despite taking a company name from an obsolete word that means revictual or resupply (as in when ships would come into port to revittle or resupply), Revittle the cheesemaker is using modern techniques to change the way small farms can make a name for their products. Started in 2015 by Mark Zimmerman as an online company that matched local cheesemakers and charcuterie producers with an online marketplace, his concept grew so quickly for some artisan producers that it made up 90 percent of one cheesemaker’s business. That dairy farmer expressed his gratitude by offering to sell his Newburg, PA, creamery to Zimmerman. The cheesemaker agreed to continue making the cheeses, but now it would be rebranded as Revittle. Early last month, Revittle inked a deal to have its products on the shelves at Giant supermarkets. This came at a good time. Just as Covid hurt many restaurants across the nation, that has funneled down to Revittle, as a producer and supplier for many restaurants. Revittle cheeses also are served in some of the state’s and country’s finest restaurants, including some Michelin 3-star restaurants along with 5,000 clients locally — restaurants, consumers, and followers at their only retail outlet at the Broad Street Market. One of the local clients is executive chef Michael Barnard of West Shore Country Club. “It is beautiful local artisan cheese,” Barnard said of Revittle’s products. “Our membership is keen on farm-to-table, and it fits right in there. I did a farm-to-table dinner, did a cheese course, and people were quite impressed. … I haven’t had a cheese of theirs I don’t like.” From software to soft cheese Zimmerman’s curiosity in food led to a career change. He ate many meals out as he traveled for his software job, and asked to peek behind the curtain. “I’m always trying to source things. I want to meet the 14 HARRISBURG MAGAZINE MAY 2021

producer. I want to meet the chef. Inevitably, I will always end up in the kitchen of a restaurant,” he said. “Almost like the Portlandia thing — yeah, let’s go meet the farmer. I’ve been doing that for a long time.” Today, Zimmerman, who’s from Camp Hill, gets to pose aside greats like celebrity chefs Jacques Pépin and Marcus Samuelsson at Food and Wine magazine events. He has created fondue recipes and pairings featuring Tröegs Beer for a Fox New York lifestyle show. Although Revittle is now primarily producing and selling its own cheeses, the idea was born from the desire to help artisan producers (often farmers) and chefs to connect. Recognizing that a farm consumes too much time for producers to market themselves, Zimmerman created a curated cheese website to organize small farm products and improve fulfillment. “We handled all of the shipping — great chefs are impatient and don’t want a product sitting for an extra day. This is cheese and meat!” Zimmerman noted. All products were guaranteed and were shipped directly from the producer to the consumer. Revittle’s cheeses are packaged and shipped from its N. 6th Street, Harrisburg warehouse. This was a concept that worked well for New York City restaurants with limited space. First, truck deliveries of fresh foods require a $500 minimum purchase. Second, storage was a big issue. Third, restaurants could get cheeses fresh from the creamery or charcuterie. “It didn’t sit in a warehouse for a month,” Zimmerman said of the success he had in finding customers. Now that he owns his own creamery, Zimmerman has expanded it five-fold in volume and is building a brand. His creamery started with sheep and goat milk cheeses, but volumes are low and costs are high, so it added cow’s milk — using a Swiss technique for pasteurization that leaves more valuable ingredients in the product and yields better milk and cheese. Although this artisan cheesemaking method takes up to four times as long and therefore costs more to produce, it has helped create creamier cheeses with more health benefits unlike most others on the market. The focus is now on Gouda, Havarti, and Farmhouse Tomme cheeses. Its cheeses have won four national awards with the American Cheese Society, and locally at the Pennsylvania Farm Show. During Covid, one of the best restaurateurs in France showed up on Revittle’s doorstep. Together, they created a morbier cheese — half goat’s milk and half sheep’s milk with vegetable ash — and explored new techniques. Although it takes a lot of time — and a cave for climate control — to make, it’s one of the top sellers at Revittle’s Broad Street Market stand. Before Covid, Revittle provided samples to Broad Street Market shoppers. Zimmerman said “people would be blown away. It’s so much fun to watch people taste good product for the first time.” He loved giving people a sample, seeing them walk around the entire market, then come back saying, “Oh my God! That was really good!” 7