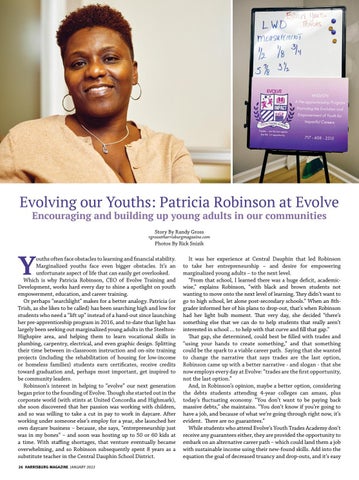 Evolving our Youths: Patricia Robinson at Evolve Encouraging and building up young adults in our communities Story By Randy Gross

ouths often face obstacles to learning and financial stability. Marginalized youths face even bigger obstacles. It’s an unfortunate aspect of life that can easily get overlooked. Which is why Patricia Robinson, CEO of Evolve Training and Development, works hard every day to shine a spotlight on youth empowerment, education, and career training. Or perhaps “searchlight” makes for a better analogy. Patricia (or Trish, as she likes to be called) has been searching high and low for students who need a “lift up” instead of a hand-out since launching her pre-apprenticeship program in 2016, and to-date that light has largely been seeking out marginalized young adults in the SteeltonHighspire area, and helping them to learn vocational skills in plumbing, carpentry, electrical, and even graphic design. Splitting their time between in-classroom instruction and on-site training projects (including the rehabilitation of housing for low-income or homeless families) students earn certificates, receive credits toward graduation and, perhaps most important, get inspired to be community leaders. Robinson’s interest in helping to “evolve” our next generation began prior to the founding of Evolve. Though she started out in the corporate world (with stints at United Concordia and Highmark), she soon discovered that her passion was working with children, and so was willing to take a cut in pay to work in daycare. After working under someone else’s employ for a year, she launched her own daycare business – because, she says, “entrepreneurship just was in my bones” – and soon was hosting up to 50 or 60 kids at a time. With staffing shortages, that venture eventually became overwhelming, and so Robinson subsequently spent 8 years as a substitute teacher in the Central Dauphin School District. 26 HARRISBURG MAGAZINE JANUARY 2022

It was her experience at Central Dauphin that led Robinson to take her entrepreneurship – and desire for empowering marginalized young adults – to the next level. “From that school, I learned there was a huge deficit, academicwise,” explains Robinson, “with black and brown students not wanting to move onto the next level of learning. They didn’t want to go to high school, let alone post-secondary schools.” When an 8thgrader informed her of his plans to drop-out, that’s when Robinson had her light bulb moment. That very day, she decided “there’s something else that we can do to help students that really aren’t interested in school … to help with that curve and fill that gap.” That gap, she determined, could best be filled with trades and “using your hands to create something,” and that something could be the spark to a viable career path. Saying that she wanted to change the narrative that says trades are the last option, Robinson came up with a better narrative - and slogan - that she now employs every day at Evolve: “trades are the first opportunity, not the last option.” And, in Robinson’s opinion, maybe a better option, considering the debts students attending 4-year colleges can amass, plus today’s fluctuating economy. “You don’t want to be paying back massive debts,” she maintains. “You don’t know if you’re going to have a job, and because of what we’re going through right now, it’s evident. There are no guarantees.” While students who attend Evolve’s Youth Trades Academy don’t receive any guarantees either, they are provided the opportunity to embark on an alternative career path – which could land them a job with sustainable income using their new-found skills. Add into the equation the goal of decreased truancy and drop-outs, and it’s easy