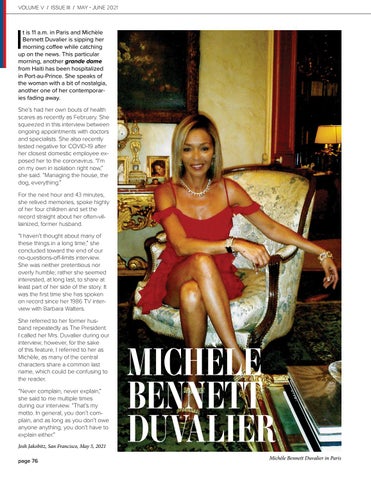 t is 11 a.m. in Paris and Michèle Bennett Duvalier is sipping her morning coffee while catching up on the news. This particular morning, another grande dame from Haiti has been hospitalized in Port-au-Prince. She speaks of the woman with a bit of nostalgia, another one of her contemporaries fading away. She’s had her own bouts of health scares as recently as February. She squeezed in this interview between ongoing appointments with doctors and specialists. She also recently tested negative for COVID-19 after her closest domestic employee exposed her to the coronavirus. “I’m on my own in isolation right now,” she said. “Managing the house, the dog, everything.” For the next hour and 43 minutes, she relived memories, spoke highly of her four children and set the record straight about her often-villainized, former husband. “I haven’t thought about many of these things in a long time,” she concluded toward the end of our no-questions-off-limits interview. She was neither pretentious nor overly humble; rather she seemed interested, at long last, to share at least part of her side of the story. It was the first time she has spoken on record since her 1986 TV interview with Barbara Walters. She referred to her former husband repeatedly as The President. I called her Mrs. Duvalier during our interview; however, for the sake of this feature, I referred to her as Michèle, as many of the central characters share a common last name, which could be confusing to the reader. “Never complain, never explain,” she said to me multiple times during our interview. “That’s my motto. In general, you don’t complain, and as long as you don’t owe anyone anything, you don’t have to explain either.”

It's Mother's Day this month and we're kicking off Polo Lifestyles-Haiti with a massive tribute to moms from all walks of life, including Michele Bennett Duvalier, the Balmir sisters and moms, and Maryse Penette-Kedar 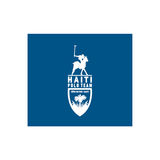