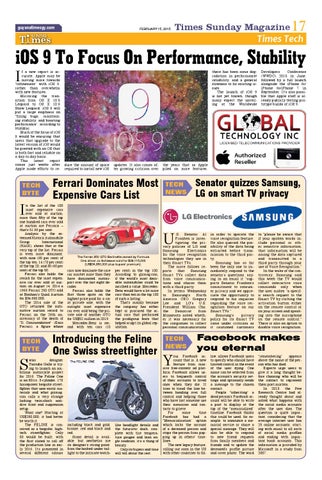 f a new report is accurate, Apple may be moving more towards “refinement” with iOS 9, rather than overwhelm with new features. Mirroring the transition from OS X 10.5 Leopard to OS X 10.6 Snow Leopard, iOS 9 will put a large emphasis on “fixing bugs, maintaining stability, and boosting performance”, according to 9to5Mac. Much of the focus of iOS 9 would be ensuring that users that upgrade to the latest version of iOS would be greeted with an OS that is both fast and reliable on a day-to-day basis. This latest report comes just weeks after Apple made efforts to re-

duce the amount of space required to install new iOS

updates. It also comes after growing criticism over

there has been some degradation in performance/ reliability, and a general slowness to fix existing issues. The launch of iOS 9 is not yet known, though many expect the unveiling at the Worldwide

cars now dominate the rare car market more than they have dominated motorsport over the last eight decades. Ferrari also holds the first three spots on the highest price paid for a car at private sale, with the outright most expensive car ever sold being the private sale of another GTO for US$52 million in 2013. Mercedes-Benz is second with ten cars (10

per cent) in the top 100. According to gizmag.com, if the world's most desirable automobiles could be ascribed a value, MercedesBenz would have a lot more cars than ten in the top 100 of such a listing. That's mainly because the company has either kept or procured the actual cars that performed the prodigious feats that helped sculpt its global reputation.

Introducing the Feline One Swiss streetfighter

wiss designer Yacouba Galle is trying to launch an ambitious motorcycle project for 2016. The Feline One is an 801cc, 3-cylinder, 170 horsepower bespoke streetfighter that uses exotic materials and what gizmag. com calls a very strange looking twin-shock antidive front end suspension setup. Want one? Starting at US$280,000, it had better be worth it. The FELINE is conceived as a bespoke, hightech streetfighter. Only 50 would be built, with the first slated to roll off the production line in early 2016. It’s presented in several different colours

the years that as Apple piled on more features,

including black and gold, bronze, red and black and red. Scant detail is available, but aesthetics are its designer's strong point; from the hooked-under taillight to the intricate watch-

like headlight details and the futuristic dash, complete with tire temperature gauges and lean angle readouts, it’s a thing of beauty. Only its buyers and time will tell about the rest.

Developers Conference (WWDC) 2015 in June, followed by a full launch alongside the iPhone 6c/ iPhone 6s/iPhone 7 in September. It's also possible that Apple staff is already publicly testing prototype builds of iOS 9.

.S. Senator Al Franken is investigating the privacy policies of LG and Samsung Electronics for the voice recognition technologies they use in their Smart TVs. The move follows reports that Samsung Smart TVs collect data from voice communications and shares them with a third party. In letters Wednesday to Samsung's North America CEO Gregory Lee and LG's U.S. President William Cho, the Democrat from Minnesota asked whether it was necessary for the companies to collect personal communications

in order to operate the voice recognition feature. He also queried the possibility of the data being extracted before transmission to the third party. Samsung has so far been the only one to immediately respond to the senator’s questions, saying in an email it "supports Senator Franken's commitment to consumer privacy and we appreciate the opportunity to respond to his inquiries regarding the voice recognition feature on our Smart TVs." Samsung's privacy policy for its Smart TV came under criticism as it cautioned customers

to "please be aware that if your spoken words include personal or other sensitive information, that information will be among the data captured and transmitted to a third party through your use of Voice Recognition." In the wake of the controversy, Samsung said this week the TV would collect interactive voice commands only when the user makes "a specific search request to the Smart TV by clicking the activation button either on the remote control or on your screen and speaking into the microphone on the remote control." There is also an option to disable voice recognition.

our Facebook account that is. A new feature from massive free-content ad platform Facebook allows users to bequeath control of their accounts to loved ones when they die. It tries to tread the line between handing over full control and helping those who have lost someone use their memories and contacts to grieve. For some time Facebook has had a “Memorialization” option which locks the account of a deceased person and stops the person from popping up in others' timelines. The new legacy feature, rolling out soon in the US with other countries to fol-

low, allows Facebook users to specify who should have limited control in the event of the user dying. One name can be selected from the account's security settings and optionally sends a message to the chosen contact. People “inheriting” a dead person's Facebook account will be able to write a post to display at the top of the “memorialized” timeline. Facebook thinks this could be used, for example, to announce a memorial service or share a special message. They will also be able to respond to new friend requests from family members and friends and to update the deceased's profile picture and cover photo. The word

“remembering” appears above the name of the person who has died. Experts urge users to give it a long thought before choosing who will be the contact to represent them post-mortem. In 2013, the Pew Research Centre had already thought about and asked what happens with the social media accounts after the user dies. The question is quite important, considering that the average internet user has 25 online accounts, starting with email to all sorts of social media profiles and ending with important bank accounts. This information is provided by Microsoft in a study from 2007. 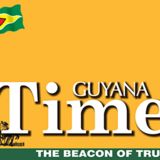