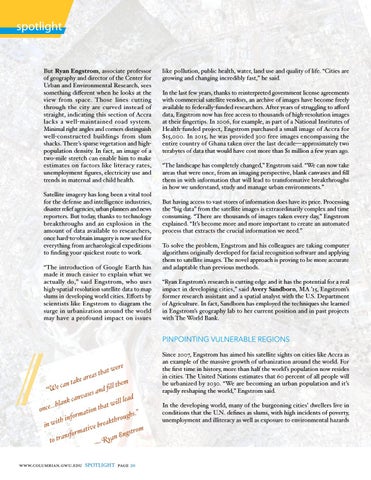 But Ryan Engstrom, associate professor of geography and director of the Center for Urban and Environmental Research, sees something different when he looks at the view from space. Those lines cutting through the city are curved instead of straight, indicating this section of Accra lacks a well-maintained road system. Minimal right angles and corners distinguish well-constructed buildings from slum shacks. There’s sparse vegetation and highpopulation density. In fact, an image of a two-mile stretch can enable him to make estimates on factors like literacy rates, unemployment figures, electricity use and trends in maternal and child health. Satellite imagery has long been a vital tool for the defense and intelligence industries, disaster relief agencies, urban planners and news reporters. But today, thanks to technology breakthroughs and an explosion in the amount of data available to researchers, once hard-to-obtain imagery is now used for everything from archaeological expeditions to finding your quickest route to work. “The introduction of Google Earth has made it much easier to explain what we actually do,” said Engstrom, who uses high-spatial resolution satellite data to map slums in developing world cities. Efforts by scientists like Engstrom to diagram the surge in urbanization around the world may have a profound impact on issues

like pollution, public health, water, land use and quality of life. “Cities are growing and changing incredibly fast,” he said. In the last few years, thanks to reinterpreted government license agreements with commercial satellite vendors, an archive of images have become freely available to federally-funded researchers. After years of struggling to afford data, Engstrom now has free access to thousands of high-resolution images at their fingertips. In 2006, for example, as part of a National Institutes of Health-funded project, Engstrom purchased a small image of Accra for $15,000. In 2015, he was provided 300 free images encompassing the entire country of Ghana taken over the last decade—approximately two terabytes of data that would have cost more than $1 million a few years ago. “The landscape has completely changed,” Engstrom said. “We can now take areas that were once, from an imaging perspective, blank canvases and fill them in with information that will lead to transformative breakthroughs in how we understand, study and manage urban environments.” But having access to vast stores of information does have its price. Processing the “big data” from the satellite images is extraordinarily complex and time consuming. “There are thousands of images taken every day,” Engstrom explained. “It’s become more and more important to create an automated process that extracts the crucial information we need.” To solve the problem, Engstrom and his colleagues are taking computer algorithms originally developed for facial recognition software and applying them to satellite images. The novel approach is proving to be more accurate and adaptable than previous methods. “Ryan Engstrom’s research is cutting edge and it has the potential for a real impact in developing cities,” said Avery Sandborn, MA ’15, Engstrom’s former research assistant and a spatial analyst with the U.S. Department of Agriculture. In fact, Sandborn has employed the techniques she learned in Engstrom’s geography lab to her current position and in past projects with The World Bank.

Since 2007, Engstrom has aimed his satellite sights on cities like Accra as an example of the massive growth of urbanization around the world. For the first time in history, more than half the world’s population now resides in cities. The United Nations estimates that 60 percent of all people will be urbanized by 2030. “We are becoming an urban population and it’s rapidly reshaping the world,” Engstrom said. In the developing world, many of the burgeoning cities’ dwellers live in conditions that the U.N. defines as slums, with high incidents of poverty, unemployment and illiteracy as well as exposure to environmental hazards 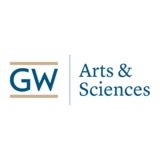 Columbian College of Arts and Sciences