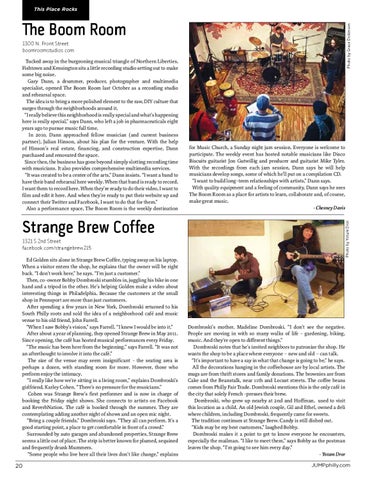 Strange Brew Coffee 1321 S 2nd Street facebook.com/strangebrew215 Ed Golden sits alone in Strange Brew Coffee, typing away on his laptop. When a visitor enters the shop, he explains that the owner will be right back. “I don’t work here,” he says. “I’m just a customer.” Then, co-owner Bobby Dombroski stumbles in, juggling his bike in one hand and a tripod in the other. He’s helping Golden make a video about interesting things in Philadelphia. Because the customers at the small shop in Pennsport are more than just customers. After spending a few years in New York, Dombroski returned to his South Philly roots and sold the idea of a neighborhood café and music venue to his old friend, John Farrell. “When I saw Bobby’s vision,” says Farrell. “I knew I would be into it.” After about a year of planning, they opened Strange Brew in May 2011. Since opening, the café has hosted musical performances every Friday. “The music has been here from the beginning,” says Farrell. “It was not an afterthought to involve it into the café.” The size of the venue may seem insignificant - the seating area is perhaps a dozen, with standing room for more. However, those who perform enjoy the intimacy. “I really like how we’re sitting in a living room,” explains Dombroski’s girlfriend, Karley Cohen. “There’s no pressure for the musicians.” Cohen was Strange Brew’s first performer and is now in charge of booking the Friday night shows. She connects to artists on Facebook and ReverbNation. The café is booked through the summer. They are contemplating adding another night of shows and an open mic night. “Bring a couple friends,” Dombroski says. “They all can perform. It’s a good starting point, a place to get comfortable in front of a crowd.” Surrounded by auto garages and abandoned properties, Strange Brew seems a little out of place. The strip is better known for plumed, sequined and frequently drunk Mummers. “Some people who live here all their lives don’t like change,” explains 20

for Music Church, a Sunday night jam session. Everyone is welcome to participate. The weekly event has hosted notable musicians like Disco Biscuits guitarist Jon Gutwillig and producer and guitarist Mike Tyler. With the recordings from each jam session, Dann says he will help musicians develop songs, some of which he&#39;ll put on a compilation CD. “I want to build long-term relationships with artists,” Dann says. With quality equipment and a feeling of community, Dann says he sees The Boom Room as a place for artists to learn, collaborate and, of course, make great music. - Chesney Davis Photo by Yotam Dror.

Tucked away in the burgeoning musical triangle of Northern Liberties, Fishtown and Kensington sits a little recording studio setting out to make some big noise. Gary Dann, a drummer, producer, photographer and multimedia specialist, opened The Boom Room last October as a recording studio and rehearsal space. The idea is to bring a more polished element to the raw, DIY culture that surges through the neighborhoods around it. “I really believe this neighborhood is really special and what’s happening here is really special,” says Dann, who left a job in pharmaceuticals eight years ago to pursue music full time. In 2010, Dann approached fellow musician (and current business partner), Julian Hinson, about his plan for the venture. With the help of Hinson&#39;s real estate, financing, and construction expertise, Dann purchased and renovated the space. Since then, the business has gone beyond simply slotting recording time with musicians. It also provides comprehensive multimedia services. “It was created to be a center of the arts,” Dann insists. “I want a band to have their band rehearsal here weekly. When that band is ready to record, I want them to record here. When they&#39;re ready to do their video, I want to film and edit it here. And when they&#39;re ready to put their website up and connect their Twitter and Facebook, I want to do that for them.” Also a performance space, The Boom Room is the weekly destination

Dombroski’s mother, Madeline Dombroski. “I don’t see the negative. People are moving in with so many walks of life - gardening, biking, music. And they’re open to different things.“ Dombroski notes that he’s invited neighbors to patronize the shop. He wants the shop to be a place where everyone – new and old – can talk. “It’s important to have a say in what that change is going to be,” he says. All the decorations hanging in the coffeehouse are by local artists. The mugs are from thrift stores and family donations. The brownies are from Cake and the Beanstalk, near 11th and Locust streets. The coffee beans comes from Philly Fair Trade. Dombroski mentions this is the only café in the city that solely French -presses their brew. Dombroski, who grew up nearby at 2nd and Hoffman, used to visit this location as a child. An old Jewish couple, Gil and Ethel, owned a deli where children, including Dombroski, frequently came for sweets. The tradition continues at Strange Brew. Candy is still dished out. “Kids may be my best customers,” laughed Bobby. Dombroski makes it a point to get to know everyone he encounters, especially the mailman. “I like to meet them,” says Bobby as the postman leaves the shop. “I’m going to see him every day.” - Yotam Dror JUMPphilly.com 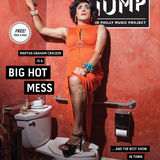