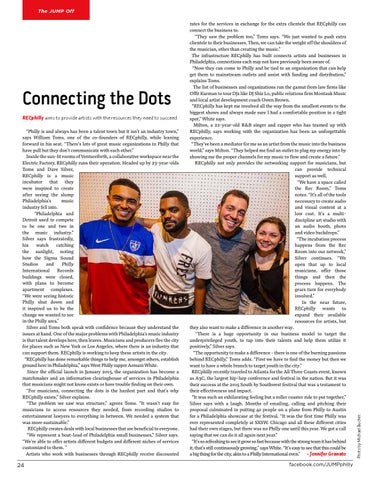 Connecting the Dots RECphilly aims to provide artists with the resources they need to succeed. “Philly is and always has been a talent town but it isn’t an industry town,” says William Toms, one of the co-founders of RECphilly, while leaning forward in his seat. “There’s lots of great music organizations in Philly that have pull but they don’t communicate with each other.” Inside the sun-lit rooms of Venturef0rth, a collaborative workspace near the Electric Factory, RECphilly runs their operation. Headed up by 23-year-olds Toms and Dave Silver, RECphilly is a music incubator that they were inspired to create after seeing the slump Philadelphia’s music industry fell into. “Philadelphia and Detroit used to compete to be one and two in the music industry.” Silver says frustratedly, his watch catching the sunlight, noting how the Sigma Sound Studios and Philly International Records buildings were closed, with plans to become apartment complexes. “We were seeing historic Philly shut down and it inspired us to be the change we wanted to see in the Philly area.” Silver and Toms both speak with confidence because they understand the issues at hand. One of the major problems with Philadelphia’s music industry is that talent develops here, then leaves. Musicians and producers flee the city for places such as New York or Los Angeles, where there is an industry that can support them. RECphilly is working to keep these artists in the city. “RECphilly has done remarkable things to help me, amongst others, establish ground here in Philadelphia,” says West Philly rapper Armani White. Since the official launch in January 2015, the organization has become a matchmaker and an information clearinghouse of services in Philadelphia that musicians might not know exists or have trouble finding on their own. “For musicians, connecting the dots is the hardest part and that’s why RECphilly exists,” Silver explains. “The problem we saw was structure,” agrees Toms. “It wasn’t easy for musicians to access resources they needed, from recording studios to entertainment lawyers to everything in between. We needed a system that was more sustainable.” RECphilly creates deals with local businesses that are beneficial to everyone. “We represent a boat-load of Philadelphia small businesses,” Silver says. “We’re able to offer artists different budgets and different niches of services customized to them. ” Artists who work with businesses through RECphilly receive discounted

rates for the services in exchange for the extra clientele that RECphilly can connect the business to. “They saw the problem too,” Toms says. “We just wanted to push extra clientele to their businesses. Then, we can take the weight off the shoulders of the musician, other than creating the music.” The infrastructure RECphilly has built connects artists and businesses in Philadelphia, connections each may not have previously been aware of. “Now they can come to Philly and be tied to an organization that can help get them to mainstream outlets and assist with funding and distribution,” explains Toms. The list of businesses and organizations run the gamut from law firms like Offit Kurman to tour DJs like DJ Shiz Lo, public relations firm Montauk Music and local artist development coach Owen Brown. “RECphilly has kept me involved all the way from the smallest events to the biggest shows and always made sure I had a comfortable position in a tight spot," White says. Milton, a 22-year-old R&B singer and rapper who has teamed up with RECphilly, says working with the organization has been an unforgettable experience. “They've been a mediator for me as an artist from the music into the business world,” says Milton. “They helped me find an outlet to plug my energy into by showing me the proper channels for my music to flow and create a future.” RECphilly not only provides the networking support for musicians, but can provide technical support as well. “We have a space called the Rec Room,” Toms notes. “It’s all of the tools necessary to create audio and visual content at a low cost. It’s a multidiscipline art studio with an audio booth, photo and video backdrops.” “The incubation process happens from the Rec Room into our network,” Silver continues. “We open that up to local musicians, offer those things and then the process happens. The gears turn for everybody involved.” In the near future, RECphilly wants to expand their available resources for artists, but they also want to make a difference in another way. “There is a huge opportunity in our business model to target the underprivileged youth, to tap into their talents and help them utilize it positively,” Silver says. “The opportunity to make a difference - there is one of the burning passions behind RECphilly,” Toms adds. “First we have to find the money but then we want to have a whole branch to target youth in the city.” RECphilly recently traveled to Atlanta for the All Three Coasts event, known as A3C, the largest hip-hop conference and festival in the nation. But it was their success at the 2015 South by Southwest festival that was a testament to their effectiveness and impact. “It was such an exhilarating feeling but a roller coaster ride to put together,” Silver says with a laugh. Months of emailing, calling and pitching their proposal culminated in putting 40 people on a plane from Philly to Austin for a Philadelphia showcase at the festival. “It was the first time Philly was ever represented completely at SXSW. Chicago and all these different cities had their own stages, but there was no Philly one until this year. We got a call saying that we can do it all again next year.” “It's so refreshing to see it grow so fast because with the strong team it has behind it, that's still continuously growing,” says White. “It's easy to see that this could be a big thing for the city, akin to a Philly International even.” - Jennifer Granato facebook.com/JUMPphilly