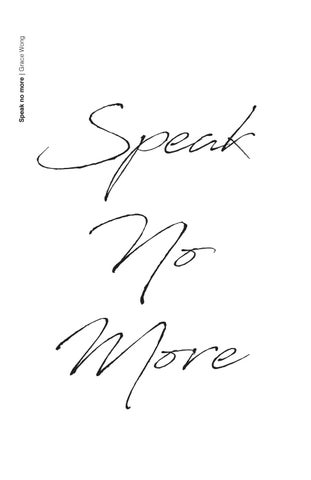 Beginning Words Speak No More is a humanistic photodocumentary examination into the complex, and often misunderstood field of speech and language disabilities. Narrated through first hand accounts from affected individuals, family members, and professors, the book acts as an empowered platform to bring voice to those who have been historically silenced. All stories were gathered from residents in Pittsburgh, Pennsylvania.

So do you feel like his struggle to speak affects his interactions with other kids?

I mean definitely. They don’t always understand him or aren’t patient enough to listen to him to get what he’s trying to say out.

Just like with adults, there are people who are patient and willing to give you time, and there are those who don’t. His friends change year to year depending on that. I mean, who’s really going to give him the time and energy? He’s not the only kid in the house so that affects how the other siblings see him. Kind of like the kids at school, they don’t treat him very nicely at times.

Solomon has epilepsy and so most likely his speech deficit is from the side of the brain that he has seizures on. He wasn’t really talking much by two and a half. He spoke words but wasn’t really putting things together. Since then, he’s been going to speech therapy sessions along with the private education that he gets. At times it really becomes a full-time job for me. There’s a lot more effort that goes into it.

So does his struggle with speech also affect other language capabilities? Well yeah, it’s not just speech he struggles with but the whole spectrum of language, including reading and writing. It’s a whole visualization and thought process that goes on inside the brain. If you can’t picture what you’re reading or if there’s too much going on that you get lost in the book, then I think a lot of people end up avoiding reading until

maybe much later in life when they’re adults. The same also applies to writing. Most people who are good readers are usually also able to write fairly well. But for Solomon he needs to take extra classes just to keep up with his peers. It’s difficult, because as you age, the interactions become so much more complex. Just being able to read people, you need to keep up with the pace.

As you age, the interactions become so much more complex. Just being able to read people, you need to keep up with the pace.

// These are some of the words he practices whenever he can. It really just takes constant practice until he can wrap his head around the concepts.

Language, and cogni all tied to Itâ&amp;#x20AC;&amp;#x2122;s the ac exchangin messages

How do we go about helping children and adults cope with social interactions?

Itâ&amp;#x20AC;&amp;#x2122;s always a work in progress. Kids will continue to change and develop. Feelings will resurface in adulthood. For many, the struggle is constant.

Oftentimes, kids develop in the context of a family, and so as practitioners we need to be conscientious of the fact that what we’re taught to do isn’t always what’s best for the family. To really make the most gains out of what these kids have to deal with in their day-to-day lives, we need to understand what’s more beneficial for the family in order to identify what will have the most impact. I remember one child who was very speech delayed and based on

common practice, we are supposed to teach them phonetics and whatnot. However, this kid just wanted to know how to say “mom”. That really touched me.

audible production of language. Language on the other hand, does not need speech; it’s how we create meaning. Without language however, there is no meaning to what we speak.

What are the common misconceptions people have about speech and language?

There’s also an assumption that speech and language just arise out of nowhere, but they actually arise from the environment the child grows up in. As practitioners, we try to help kids enrich their understanding of their environment.

Many tend to confuse speech from language. Those two may be interrelated, but they are actually entirely separate functions. Speech is the

I remember one child who was very speech delayed...this kid just wanted to know how to say “Mom”. That really touched me.

// This is a toy house that kids get to play with in therapy.

Do you have any interesting things in your office that might be insightful for readers?

Well I read a lot. There are a lot of books out there that show some of the more invisible sides of dealing with speech and language disorders.

Jill Bolte Taylor is a very special author. Prior to writing this book, she actually suffered a severe stroke. She spent the later years of her life writing a book about it and even speaking at a TED talk. Itâ&amp;#x20AC;&amp;#x2122;s very inspiring, you should go check it out! There are some other great reads too, like The Diving Bell and the Butterfly. Itâ&amp;#x20AC;&amp;#x2122;s a memoir by this former editor in locked-in sydrome who produced the entire book by blinking to letters in the alphabet.

How do you and other caretakers typically communicate with him?

My son is non-verbal, but over a gradual period of time, we’ve been able to understand his wants and needs based on his expressions.

After you get to know him over a long period of time, you realize he’s such a happy person, really. He’s always out volunteering at Friendship Circle, the neighborhood special needs center and out exploring the city. Our schedule is so packed this Saturday! A lot of people in the community also know him and take the time to say “hi” to him. He’s nonverbal and oftentimes we need to use pictureboards to understand what he wants, but that really doesn’t stop him from staying active in the community like other adults. He’s 33 and still going on strong!

How has the care system for disabilities changed over the years? It wasn’t until the late 70’s did the government really start to take notice of the corrupt treatment system put in place for those with complex needs. Back then, underground institutions used to lock them up into these hospitals with terrible living conditions. There were hundreds of bed with no TV and no therapists...it was like prison, really.

These days, there’s a lot more federally-funded services that help the underserved, especially for children. However, there’s still a huge gap in helping these children transition into adulthood. Caretakers often come and go because the job is not seen as prestigious in the healthcare field. And so you have caretakers leaving as soon as a better opportunity opens up, which hurts those who are seeking help. With speech and language impairments,

they need caretakers who really understand their unique ways of communicating. Socially, there’s also a lot that could be done to help citizens understand their situation. Stereotypes happen because it saves time for most people. You see somebody and you’re not sure how to approach them. You could say hello and be unsure of whether or not they respond. It takes patience to get to know them. and to really understand their personalities.

Stereotypes happen because it save times for most people. It takes patience to really understand their personalities.

// Back in the old days, my son and my other kids would go on family camping trips.

Grace Wong is a New York-based interdisciplinary artist, photographer and designer. She is passionate about using creative forms to empower human voices. She is currently studying in Pittsburgh. For press inquiry, please email: gracew@andrew.cmu.edu

A photo documentary project exploring how book-form can be used to empower invisible citizens facing speech or language impairments.