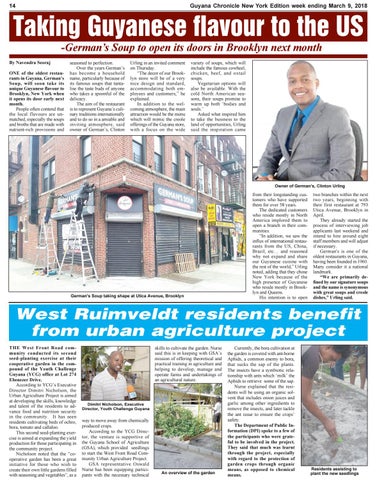 By Navendra Seoraj ONE of the oldest restaurants in Guyana, German’s Soup, will soon take its unique Guyanese flavour to Brooklyn, New York when it opens its door early next month. People often contend that the local flavours are unmatched, especially the soups and broths that are made with nutrient-rich provisions and

seasoned to perfection. Over the years German’s has become a household name, particularly because of its famous soups that tantalise the taste buds of anyone who takes a spoonful of the delicacy. The aim of the restaurant is to represent Guyana’s culinary traditions internationally and to do so in a amiable and inviting atmosphere, said owner of German’s, Clinton

Urling in an invited comment on Thursday. “The decor of our Brooklyn store will be of a very nice design and standard, accommodating both employees and customers,” he explained. In addition to the welcoming atmosphere, the main attraction would be the menu which will mimic the creole offerings of the Guyana store, with a focus on the wide

variety of soups, which will include the famous cowheel, chicken, beef, and oxtail soups. Vegetarian options will also be available. With the cold North American seasons, their soups promise to warm up both ‘bodies and souls.’ Asked what inspired him to take the business to the land of opportunities, Urling said the inspiration came

from their longstanding customers who have supported them for over 58 years. The dedicated customers who reside mostly in North America implored them to open a branch in their communities. “In addition, we saw the influx of international restaurants from the US, China, Brazil, etc… and reasoned why not expand and share our Guyanese cuisine with the rest of the world,” Urling noted, adding that they chose New York because of the high presence of Guyanese who reside mostly in Brooklyn and Queens. His intention is to open

two branches within the next two years, beginning with their first restaurant at 793 Utica Avenue, Brooklyn in April. They already started the process of interviewing job applicants last weekend and intend to hire around eight staff members and will adjust if necessary. German&#39;s is one of the oldest restaurants in Guyana, having been founded in 1960. Many consider it a national landmark. “We are primarily defined by our signature soups and the name is synonymous with great soups and creole dishes,” Urling said.

West Ruimveldt residents benefit from urban agriculture project THE West Front Road community conducted its second seed-planting exercise at their cooperative garden in the compound of the Youth Challenge Guyana (YCG) office at Lot 274 Ebenezer Drive. According to YCG’s Executive Director Dimitri Nicholson, the Urban Agriculture Project is aimed at developing the skills, knowledge and talent of the residents to advance food and nutrition security in the community. It has seen residents cultivating beds of ochro, bora, tomato and callaloo. This second seed-planting exercise is aimed at expanding the yield production for those participating in the community project. Nicholson noted that the “cooperative garden has been a great initiative for those who wish to create their own little gardens filled with seasoning and vegetables”, as a

skills to cultivate the garden. Nurse said this is in keeping with GSA’s mission of offering theoretical and practical training in agriculture and helping to develop, manage and operate farms and undertakings of an agricultural nature.

way to move away from chemically produced crops. According to the YCG Director, the venture is supportive of the Guyana School of Agriculture (GSA), which provided seedlings to start the West Front Road Community Urban Agriculture Project. GSA representative Oswald Nurse has been equipping participants with the necessary technical

An overview of the garden

Currently, the bora cultivation at the garden is covered with ant-borne Aphids, a common enemy to bora, that sucks the sap of the plants. The insects have a symbiotic relationship with ants which ‘milk’ the Aphids to retrieve some of the sap. Nurse explained that the residents will be using an organic solvent that includes onion juices and garlic among other ingredients to remove the insects, and later tackle the ant issue to ensure the crops’ safety. The Department of Public Information (DPI) spoke to a few of the participants who were grateful to be involved in the project. They said that much was learnt through the project, especially with regard to the protection of garden crops through organic means, as opposed to chemical means. 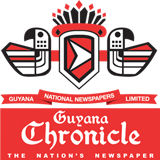