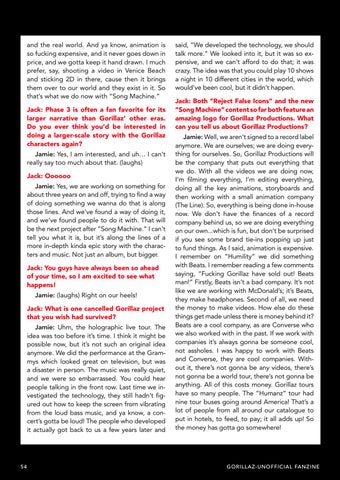 and the real world. And ya know, animation is so fucking expensive, and it never goes down in price, and we gotta keep it hand drawn. I much prefer, say, shooting a video in Venice Beach and sticking 2D in there, cause then it brings them over to our world and they exist in it. So that’s what we do now with “Song Machine.” Jack: Phase 3 is often a fan favorite for its larger narrative than Gorillaz’ other eras. Do you ever think you’d be interested in doing a larger-scale story with the Gorillaz characters again? Jamie: Yes, I am interested, and uh… I can’t really say too much about that. (laughs) Jack: Oooooo Jamie: Yes, we are working on something for about three years on and off, trying to find a way of doing something we wanna do that is along those lines. And we’ve found a way of doing it, and we’ve found people to do it with. That will be the next project after “Song Machine.” I can’t tell you what it is, but it’s along the lines of a more in-depth kinda epic story with the characters and music. Not just an album, but bigger. Jack: You guys have always been so ahead of your time, so I am excited to see what happens! Jamie: (laughs) Right on our heels! Jack: What is one cancelled Gorillaz project that you wish had survived? Jamie: Uhm, the holographic live tour. The idea was too before it’s time. I think it might be possible now, but it’s not such an original idea anymore. We did the performance at the Grammys which looked great on television, but was a disaster in person. The music was really quiet, and we were so embarrassed. You could hear people talking in the front row. Last time we investigated the technology, they still hadn’t figured out how to keep the screen from vibrating from the loud bass music, and ya know, a concert’s gotta be loud! The people who developed it actually got back to us a few years later and

said, “We developed the technology, we should talk more.” We looked into it, but it was so expensive, and we can’t afford to do that; it was crazy. The idea was that you could play 10 shows a night in 10 different cities in the world, which would’ve been cool, but it didn’t happen. Jack: Both “Reject False Icons” and the new “Song Machine” content so far both feature an amazing logo for Gorillaz Productions. What can you tell us about Gorillaz Productions? Jamie: Well, we aren’t signed to a record label anymore. We are ourselves; we are doing everything for ourselves. So, Gorillaz Productions will be the company that puts out everything that we do. With all the videos we are doing now, I’m filming everything, I’m editing everything, doing all the key animations, storyboards and then working with a small animation company (The Line). So, everything is being done in-house now. We don’t have the finances of a record company behind us, so we are doing everything on our own...which is fun, but don’t be surprised if you see some brand tie-ins popping up just to fund things. As I said, animation is expensive. I remember on “Humility” we did something with Beats. I remember reading a few comments saying, “Fucking Gorillaz have sold out! Beats man!” Firstly, Beats isn’t a bad company. It’s not like we are working with McDonald’s; it’s Beats, they make headphones. Second of all, we need the money to make videos. How else do these things get made unless there is money behind it? Beats are a cool company, as are Converse who we also worked with in the past. If we work with companies it’s always gonna be someone cool, not assholes. I was happy to work with Beats and Converse, they are cool companies. Without it, there’s not gonna be any videos, there’s not gonna be a world tour, there’s not gonna be anything. All of this costs money. Gorillaz tours have so many people. The “Humanz” tour had nine tour buses going around America! That’s a lot of people from all around our catalogue to put in hotels, to feed, to pay; it all adds up! So the money has gotta go somewhere!