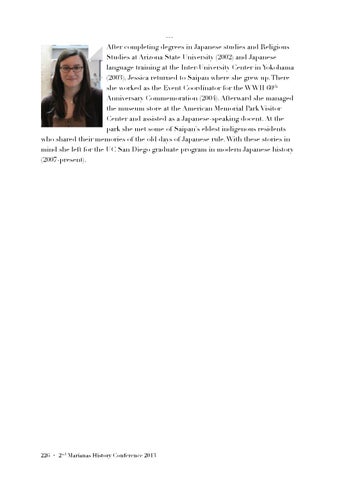 --After completing degrees in Japanese studies and Religious Studies at Arizona State University (2002) and Japanese language training at the Inter-University Center in Yokohama (2003), Jessica returned to Saipan where she grew up. There she worked as the Event Coordinator for the WWII 60th Anniversary Commemoration (2004). Afterward she managed the museum store at the American Memorial Park Visitor Center and assisted as a Japanese-speaking docent. At the park she met some of Saipan’s eldest indigenous residents who shared their memories of the old days of Japanese rule. With these stories in mind she left for the UC San Diego graduate program in modern Japanese history (2007-present).