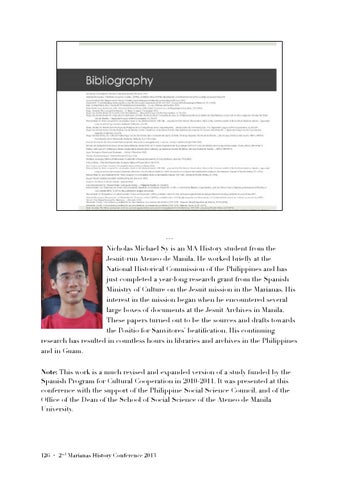 ! --Nicholas Michael Sy is an MA History student from the Jesuit-run Ateneo de Manila. He worked briefly at the National Historical Commission of the Philippines and has just completed a year-long research grant from the Spanish Ministry of Culture on the Jesuit mission in the Marianas. His interest in the mission began when he encountered several large boxes of documents at the Jesuit Archives in Manila. These papers turned out to be the sources and drafts towards the Positio for Sanvitores’ beatification. His continuing research has resulted in countless hours in libraries and archives in the Philippines and in Guam.

Note: This work is a much revised and expanded version of a study funded by the Spanish Program for Cultural Cooperation in 2010-2011. It was presented at this conference with the support of the Philippine Social Science Council, and of the Office of the Dean of the School of Social Science of the Ateneo de Manila University.