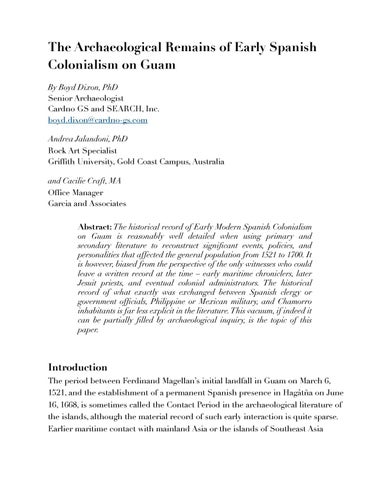 The Archaeological Remains of Early Spanish Colonialism on Guam By Boyd Dixon, PhD Senior Archaeologist Cardno GS and SEARCH, Inc. boyd.dixon@cardno-gs.com Andrea Jalandoni, PhD Rock Art Specialist Griffith University, Gold Coast Campus, Australia and Cacilie Craft, MA Office Manager Garcia and Associates Abstract: The historical record of Early Modern Spanish Colonialism on Guam is reasonably well detailed when using primary and secondary literature to reconstruct significant events, policies, and personalities that affected the general population from 1521 to 1700. It is however, biased from the perspective of the only witnesses who could leave a written record at the time – early maritime chroniclers, later Jesuit priests, and eventual colonial administrators. The historical record of what exactly was exchanged between Spanish clergy or government officials, Philippine or Mexican military, and Chamorro inhabitants is far less explicit in the literature. This vacuum, if indeed it can be partially filled by archaeological inquiry, is the topic of this paper.

Introduction The period between Ferdinand Magellan’s initial landfall in Guam on March 6, 1521, and the establishment of a permanent Spanish presence in Hagåtña on June 16, 1668, is sometimes called the Contact Period in the archaeological literature of the islands, although the material record of such early interaction is quite sparse. Earlier maritime contact with mainland Asia or the islands of Southeast Asia