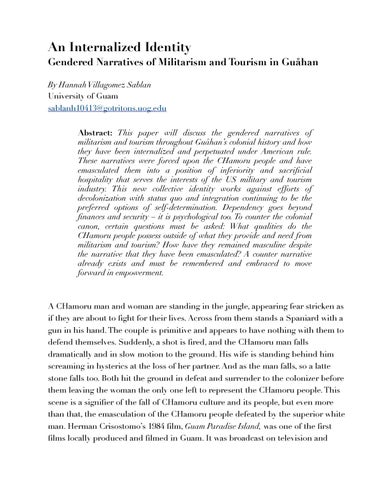 An Internalized Identity Gendered Narratives of Militarism and Tourism in Guåhan By Hannah Villagomez Sablan University of Guam sablanh10413@gotritons.uog.edu Abstract: This paper will discuss the gendered narratives of militarism and tourism throughout Guåhan’s colonial history and how they have been internalized and perpetuated under American rule. These narratives were forced upon the CHamoru people and have emasculated them into a position of inferiority and sacrificial hospitality that serves the interests of the US military and tourism industry. This new collective identity works against efforts of decolonization with status quo and integration continuing to be the preferred options of self-determination. Dependency goes beyond finances and security – it is psychological too. To counter the colonial canon, certain questions must be asked: What qualities do the CHamoru people possess outside of what they provide and need from militarism and tourism? How have they remained masculine despite the narrative that they have been emasculated? A counter narrative already exists and must be remembered and embraced to move forward in empowerment.

A CHamoru man and woman are standing in the jungle, appearing fear stricken as if they are about to fight for their lives. Across from them stands a Spaniard with a gun in his hand. The couple is primitive and appears to have nothing with them to defend themselves. Suddenly, a shot is fired, and the CHamoru man falls dramatically and in slow motion to the ground. His wife is standing behind him screaming in hysterics at the loss of her partner. And as the man falls, so a latte stone falls too. Both hit the ground in defeat and surrender to the colonizer before them leaving the woman the only one left to represent the CHamoru people. This scene is a signifier of the fall of CHamoru culture and its people, but even more than that, the emasculation of the CHamoru people defeated by the superior white man. Herman Crisostomo’s 1984 film, Guam Paradise Island, was one of the first films locally produced and filmed in Guam. It was broadcast on television and