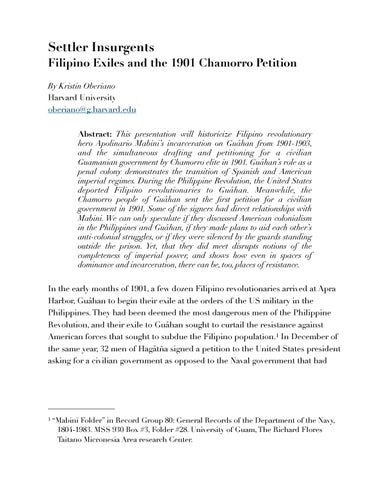 Settler Insurgents Filipino Exiles and the 1901 Chamorro Petition By Kristin Oberiano Harvard University oberiano@g.harvard.edu Abstract: This presentation will historicize Filipino revolutionary hero Apolinario Mabini’s incarceration on Guåhan from 1901-1903, and the simultaneous drafting and petitioning for a civilian Guamanian government by Chamorro elite in 1901. Guåhan’s role as a penal colony demonstrates the transition of Spanish and American imperial regimes. During the Philippine Revolution, the United States deported Filipino revolutionaries to Guåhan. Meanwhile, the Chamorro people of Guåhan sent the first petition for a civilian government in 1901. Some of the signers had direct relationships with Mabini. We can only speculate if they discussed American colonialism in the Philippines and Guåhan, if they made plans to aid each other’s anti-colonial struggles, or if they were silenced by the guards standing outside the prison. Yet, that they did meet disrupts notions of the completeness of imperial power, and shows how even in spaces of dominance and incarceration, there can be, too, places of resistance. In the early months of 1901, a few dozen Filipino revolutionaries arrived at Apra Harbor, Guåhan to begin their exile at the orders of the US military in the Philippines. They had been deemed the most dangerous men of the Philippine Revolution, and their exile to Guåhan sought to curtail the resistance against American forces that sought to subdue the Filipino population.1 In December of the same year, 32 men of Hagåtña signed a petition to the United States president asking for a civilian government as opposed to the Naval government that had