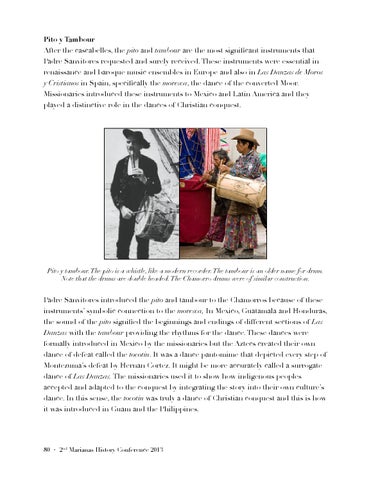 Pito y Tambour After the cascabelles, the pito and tambour are the most significant instruments that Padre Sanvitores requested and surely received. These instruments were essential in renaissance and baroque music ensembles in Europe and also in Las Danzas de Moros y Cristianos in Spain, specifically the moresca, the dance of the converted Moor. Missionaries introduced these instruments to Mexico and Latin America and they played a distinctive role in the dances of Christian conquest.

Pito y tambour. The pito is a whistle, like a modern recorder. The tambour is an older name for drum. Note that the drums are double headed. The Chamorro drums were of similar construction.

Padre Sanvitores introduced the pito and tambour to the Chamorros because of these instruments’ symbolic connection to the moresca, In Mexico, Guatamala and Honduras, the sound of the pito signified the beginnings and endings of different sections of Las Danzas with the tambour providing the rhythms for the dance. These dances were formally introduced in Mexico by the missionaries but the Aztecs created their own dance of defeat called the tocotin. It was a dance pantomime that depicted every step of Montezuma’s defeat by Hernan Cortez. It might be more accurately called a surrogate dance of Las Danzas. The missionaries used it to show how indigenous peoples accepted and adapted to the conquest by integrating the story into their own culture’s dance. In this sense, the tocotin was truly a dance of Christian conquest and this is how it was introduced in Guam and the Philippines.