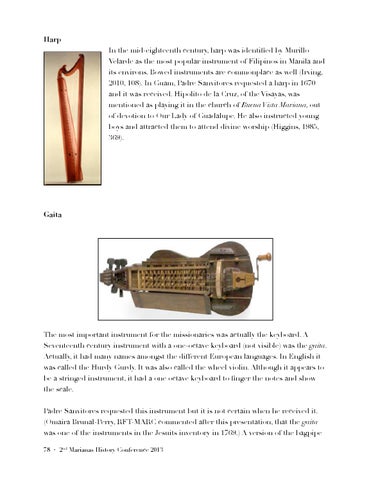 Harp In the mid-eighteenth century, harp was identified by Murillo Velarde as the most popular instrument of Filipinos in Manila and its environs. Bowed instruments are commonplace as well (Irving, 2010, 108). In Guam, Padre Sanvitores requested a harp in 1670 and it was received. Hipolito de la Cruz, of the Visayas, was mentioned as playing it in the church of Buena Vista Mariana, out of devotion to Our Lady of Guadalupe. He also instructed young boys and attracted them to attend divine worship (Higgins, 1985, 369).

The most important instrument for the missionaries was actually the keyboard. A Seventeenth century instrument with a one-octave keyboard (not visible) was the gaita. Actually, it had many names amongst the different European languages. In English it was called the Hurdy Gurdy. It was also called the wheel violin. Although it appears to be a stringed instrument, it had a one octave keyboard to finger the notes and show the scale.

Padre Sanvitores requested this instrument but it is not certain when he received it. (Omaira Brunal-Perry, RFT-MARC commented after this presentation, that the gaita was one of the instruments in the Jesuits inventory in 1769.) A version of the bagpipe 78 ! ă&#x192;ť 2nd Marianas History Conference 2013