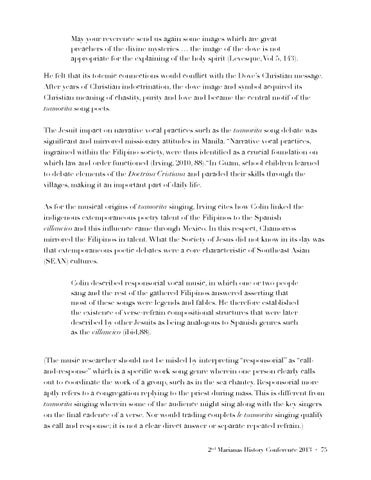 May your reverence send us again some images which are great preachers of the divine mysteries … the image of the dove is not appropriate for the explaining of the holy spirit (Levesque, Vol 5, 143). He felt that its totemic connections would conflict with the Dove’s Christian message. After years of Christian indoctrination, the dove image and symbol acquired its Christian meaning of chastity, purity and love and became the central motif of the tsamorita song poets.

The Jesuit impact on narrative vocal practices such as the tsamorita song debate was significant and mirrored missionary attitudes in Manila. “Narrative vocal practices, ingrained within the Filipino society, were thus identified as a crucial foundation on which law and order functioned (Irving, 2010, 88).“In Guam, school children learned to debate elements of the Doctrina Cristiana and paraded their skills through the villages, making it an important part of daily life.

As for the musical origins of tsamorita singing, Irving cites how Colin linked the indigenous extemporaneous poetry talent of the Filipinos to the Spanish villancico and this influence came through Mexico. In this respect, Chamorros mirrored the Filipinos in talent. What the Society of Jesus did not know in its day was that extemporaneous poetic debates were a core characteristic of Southeast Asian (SEAN) cultures.

Colin described responsorial vocal music, in which one or two people sang and the rest of the gathered Filipinos answered asserting that most of these songs were legends and fables. He therefore established the existence of verse-refrain compositional structures that were later described by other Jesuits as being analogous to Spanish genres such as the villancico (ibid,88).

! (The music researcher should not be misled by interpreting “responsorial” as “calland-response” which is a specific work song genre wherein one person clearly calls out to coordinate the work of a group, such as in the sea chantey. Responsorial more aptly refers to a congregation replying to the priest during mass. This is different from tsamorita singing wherein some of the audience might sing along with the key singers on the final cadence of a verse. Nor would trading couplets le tsamorita singing qualify as call and response; it is not a clear direct answer or separate repeated refrain.)