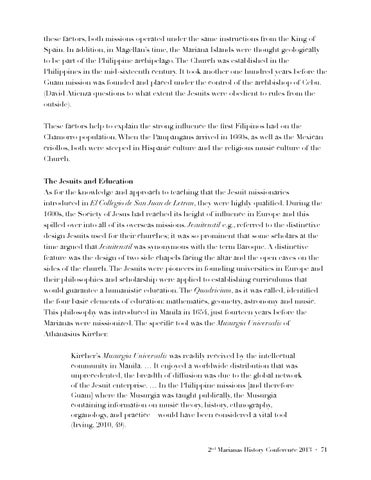 these factors, both missions operated under the same instructions from the King of Spain. In addition, in Magellan’s time, the Mariana Islands were thought geologically to be part of the Philippine archipelago. The Church was established in the Philippines in the mid-sixteenth century. It took another one hundred years before the Guam mission was founded and placed under the control of the archbishop of Cebu. (David Atienza questions to what extent the Jesuits were obedient to rules from the outside).

These factors help to explain the strong influence the first Filipinos had on the Chamorro population. When the Pampangans arrived in 1660s, as well as the Mexican criollos, both were steeped in Hispanic culture and the religious music culture of the Church.

The Jesuits and Education As for the knowledge and approach to teaching that the Jesuit missionaries introduced in El Collegio de San Juan de Letran, they were highly qualified. During the 1600s, the Society of Jesus had reached its height of influence in Europe and this spilled over into all of its overseas missions. Jesuitenstil e.g., referred to the distinctive design Jesuits used for their churches; it was so prominent that some scholars at the time argued that Jesuitenstil was synonymous with the term Baroque. A distinctive feature was the design of two side chapels facing the altar and the open eaves on the sides of the church. The Jesuits were pioneers in founding universities in Europe and their philosophies and scholarship were applied to establishing curriculums that would guarantee a humanistic education. The Quadrivium, as it was called, identified the four basic elements of education: mathematics, geometry, astronomy and music. This philosophy was introduced in Manila in 1654, just fourteen years before the Marianas were missionized. The specific tool was the Musurgia Universalis of Athanasius Kircher.

Kircher’s Musurgia Universalis was readily received by the intellectual community in Manila. … It enjoyed a worldwide distribution that was unprecedented, the breadth of diffusion was due to the global network of the Jesuit enterprise. … In the Philippine missions [and therefore Guam] where the Musurgia was taught publically, the Musurgia – containing information on music theory, history, ethnography, organology, and practice – would have been considered a vital tool (Irving, 2010, 49). 2nd Marianas History Conference 2013 ・ !71