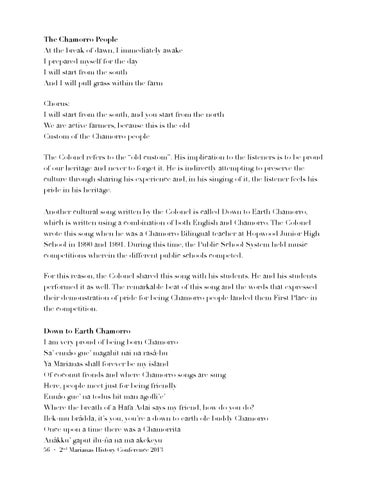 The Chamorro People At the break of dawn, I immediately awake I prepared myself for the day I will start from the south And I will pull grass within the farm

The Colonel refers to the “old custom”. His implication to the listeners is to be proud of our heritage and never to forget it. He is indirectly attempting to preserve the culture through sharing his experience and, in his singing of it, the listener feels his pride in his heritage.

Another cultural song written by the Colonel is called Down to Earth Chamorro, which is written using a combination of both English and Chamorro. The Colonel wrote this song when he was a Chamorro Bilingual teacher at Hopwood Junior High School in 1990 and 1991. During this time, the Public School System held music competitions wherein the different public schools competed.

For this reason, the Colonel shared this song with his students. He and his students performed it as well. The remarkable beat of this song and the words that expressed their demonstration of pride for being Chamorro people landed them First Place in the competition.

Down to Earth Chamorro I am very proud of being born Chamorro Sa’ ennåo gue’ magahit nai na raså-hu Ya Marianas shall forever be my island Of coconut fronds and where Chamorro songs are sung Here, people meet just for being friendly Ennåo gue’ na todus hit man agofli’e’ Where the breath of a Hafa Adai says my friend, how do you do? Ilek-mu brådda, it’s you, you’re a down to earth ole buddy Chamorro Once upon a time there was a Chamorrita Anåkku’ gaput ilu-ña na ma akekeyu 56 ! ・ 2nd Marianas History Conference 2013