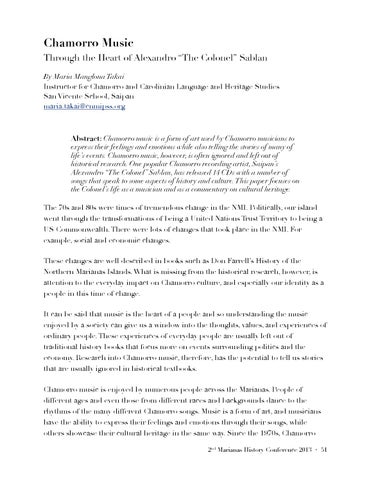 Chamorro Music Through the Heart of Alexandro “The Colonel” Sablan

Abstract: Chamorro music is a form of art used by Chamorro musicians to express their feelings and emotions while also telling the stories of many of life’s events. Chamorro music, however, is often ignored and left out of historical research. One popular Chamorro recording artist, Saipan’s Alexandro “The Colonel” Sablan, has released 14 CDs with a number of songs that speak to some aspects of history and culture. This paper focuses on the Colonel’s life as a musician and as a commentary on cultural heritage. The 70s and 80s were times of tremendous change in the NMI. Politically, our island went through the transformations of being a United Nations Trust Territory to being a US Commonwealth. There were lots of changes that took place in the NMI. For example, social and economic changes.

These changes are well described in books such as Don Farrell’s History of the Northern Marianas Islands. What is missing from the historical research, however, is attention to the everyday impact on Chamorro culture, and especially our identity as a people in this time of change.

It can be said that music is the heart of a people and so understanding the music enjoyed by a society can give us a window into the thoughts, values, and experiences of ordinary people. These experiences of everyday people are usually left out of traditional history books that focus more on events surrounding politics and the economy. Research into Chamorro music, therefore, has the potential to tell us stories that are usually ignored in historical textbooks.

Chamorro music is enjoyed by numerous people across the Marianas. People of different ages and even those from different races and backgrounds dance to the rhythms of the many different Chamorro songs. Music is a form of art, and musicians have the ability to express their feelings and emotions through their songs, while others showcase their cultural heritage in the same way. Since the 1970s, Chamorro 2nd Marianas History Conference 2013 ・ !51