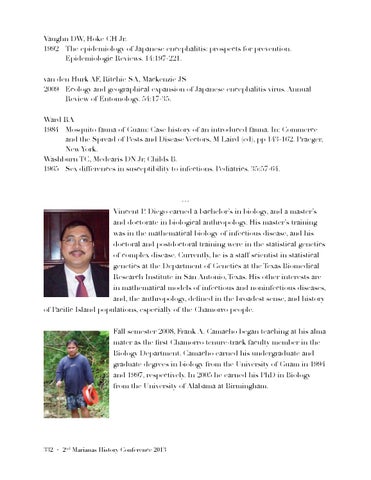 --Vincent P. Diego earned a bachelor’s in biology, and a master’s and doctorate in biological anthropology. His master’s training was in the mathematical biology of infectious disease, and his doctoral and postdoctoral training were in the statistical genetics of complex disease. Currently, he is a staff scientist in statistical genetics at the Department of Genetics at the Texas Biomedical Research Institute in San Antonio, Texas. His other interests are in mathematical models of infectious and noninfectious diseases, and, the anthropology, defined in the broadest sense, and history of Pacific Island populations, especially of the Chamorro people. Fall semester 2008, Frank A. Camacho began teaching at his alma mater as the first Chamorro tenure-track faculty member in the Biology Department. Camacho earned his undergraduate and graduate degrees in biology from the University of Guam in 1994 and 1997, respectively. In 2005 he earned his PhD in Biology from the University of Alabama at Birmingham.