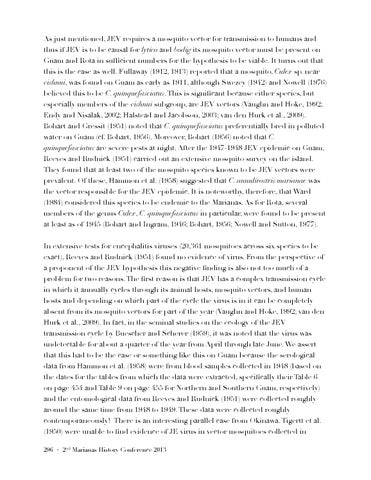 As just mentioned, JEV requires a mosquito vector for transmission to humans and thus if JEV is to be causal for lytico and bodig its mosquito vector must be present on Guam and Rota in sufficient numbers for the hypothesis to be viable. It turns out that this is the case as well. Fullaway (1912, 1913) reported that a mosquito, Culex sp. near vishnui, was found on Guam as early as 1911, although Swezey (1942) and Nowell (1976) believed this to be C. quinquefasciatus. This is significant because either species, but especially members of the vishnui subgroup, are JEV vectors (Vaughn and Hoke, 1992; Endy and Nisalak, 2002; Halstead and Jacobson, 2003; van den Hurk et al., 2009). Bohart and Gressit (1951) noted that C. quinquefasciatus preferentially bred in polluted water on Guam (cf. Bohart, 1956). Moreover, Bohart (1956) noted that C. quinquefasciatus are severe pests at night. After the 1947-1948 JEV epidemic on Guam, Reeves and Rudnick (1951) carried out an extensive mosquito survey on the island. They found that at least two of the mosquito species known to be JEV vectors were prevalent. Of these, Hammon et al. (1958) suggested that C. annulirostris marianae was the vector responsible for the JEV epidemic. It is noteworthy, therefore, that Ward (1984) considered this species to be endemic to the Marianas. As for Rota, several members of the genus Culex, C. quinquefasciatus in particular, were found to be present at least as of 1945 (Bohart and Ingram, 1946; Bohart, 1956; Nowell and Sutton, 1977).

In extensive tests for encephalitis viruses (20,361 mosquitoes across six species to be exact), Reeves and Rudnick (1951) found no evidence of virus. From the perspective of a proponent of the JEV hypothesis this negative finding is also not too much of a problem for two reasons. The first reason is that JEV has a complex transmission cycle in which it annually cycles through its animal hosts, mosquito vectors, and human hosts and depending on which part of the cycle the virus is in it can be completely absent from its mosquito vectors for part of the year (Vaughn and Hoke, 1992; van den Hurk et al., 2009). In fact, in the seminal studies on the ecology of the JEV transmission cycle by Buescher and Scherer (1959), it was noted that the virus was undetectable for about a quarter of the year from April through late June. We assert that this had to be the case or something like this on Guam because the serological data from Hammon et al. (1958) were from blood samples collected in 1948 (based on the dates for the tables from which the data were extracted, specifically their Table 6 on page 454 and Table 9 on page 455 for Northern and Southern Guam, respectively) and the entomological data from Reeves and Rudnick (1951) were collected roughly around the same time from 1948 to 1949. These data were collected roughly contemporaneously! There is an interesting parallel case from Okinawa. Tigertt et al. (1950) were unable to find evidence of JE virus in vector mosquitoes collected in 296 ! ă&#x192;ť 2nd Marianas History Conference 2013