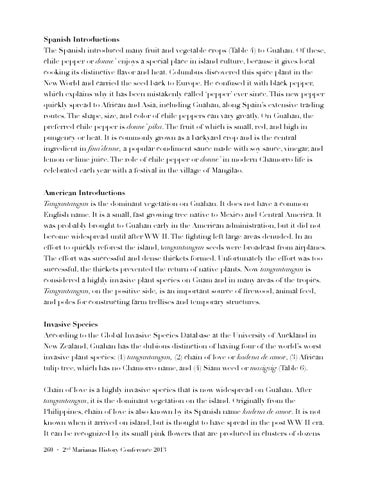 Spanish Introductions The Spanish introduced many fruit and vegetable crops (Table 4) to Guahan. Of these, chile pepper or donne’ enjoys a special place in island culture, because it gives local cooking its distinctive flavor and heat. Columbus discovered this spice plant in the New World and carried the seed back to Europe. He confused it with black pepper, which explains why it has been mistakenly called ‘pepper’ ever since. This new pepper quickly spread to African and Asia, including Guahan, along Spain’s extensive trading routes. The shape, size, and color of chile peppers can vary greatly. On Guahan, the preferred chile pepper is donne’ pika. The fruit of which is small, red, and high in pungency or heat. It is commonly grown as a backyard crop and is the central ingredient in fina’denne, a popular condiment sauce made with soy sauce, vinegar, and lemon or lime juice. The role of chile pepper or donne’ in modern Chamorro life is celebrated each year with a festival in the village of Mangilao.

American Introductions Tangantangan is the dominant vegetation on Guahan. It does not have a common English name. It is a small, fast growing tree native to Mexico and Central America. It was probably brought to Guahan early in the American administration, but it did not become widespread until after WW II. The fighting left large areas denuded. In an effort to quickly reforest the island, tangantangan seeds were broadcast from airplanes. The effort was successful and dense thickets formed. Unfortunately the effort was too successful, the thickets prevented the return of native plants. Now tangantangan is considered a highly invasive plant species on Guam and in many areas of the tropics. Tangantangan, on the positive side, is an important source of firewood, animal feed, and poles for constructing farm trellises and temporary structures.

Invasive Species According to the Global Invasive Species Database at the University of Auckland in New Zealand, Guahan has the dubious distinction of having four of the world’s worst invasive plant species: (1) tangantangan, (2) chain of love or kadena de amor, (3) African tulip tree, which has no Chamorro name, and (4) Siam weed or masigsig (Table 6).

Chain of love is a highly invasive species that is now widespread on Guahan. After tangantangan, it is the dominant vegetation on the island. Originally from the Philippines, chain of love is also known by its Spanish name kadena de amor. It is not known when it arrived on island, but is thought to have spread in the post WW II era. It can be recognized by its small pink flowers that are produced in clusters of dozens 260 ! ・ 2nd Marianas History Conference 2013