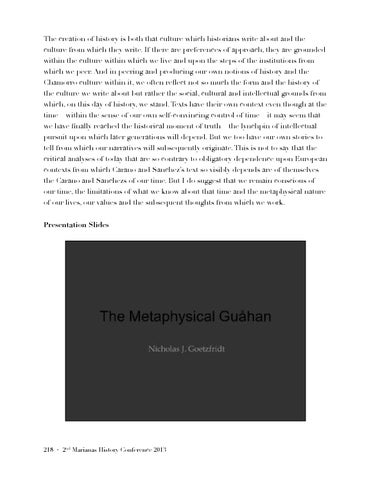 The creation of history is both that culture which historians write about and the culture from which they write. If there are preferences of approach, they are grounded within the culture within which we live and upon the steps of the institutions from which we peer. And in peering and producing our own notions of history and the Chamorro culture within it, we often reflect not so much the form and the history of the culture we write about but rather the social, cultural and intellectual grounds from which, on this day of history, we stand. Texts have their own context even though at the time – within the sense of our own self-convincing control of time – it may seem that we have finally reached the historical moment of truth – the lynchpin of intellectual pursuit upon which later generations will depend. But we too have our own stories to tell from which our narratives will subsequently originate. This is not to say that the critical analyses of today that are so contrary to obligatory dependence upon European contexts from which Carano and Sanchez’s text so visibly depends are of themselves the Carano and Sanchezs of our time. But I do suggest that we remain conscious of our time, the limitations of what we know about that time and the metaphysical nature of our lives, our values and the subsequent thoughts from which we work.