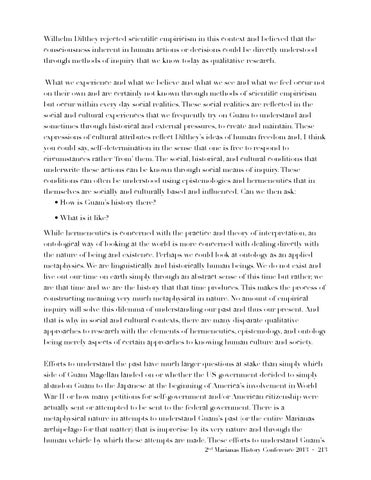 Wilhelm Dilthey rejected scientific empiricism in this context and believed that the consciousness inherent in human actions or decisions could be directly understood through methods of inquiry that we know today as qualitative research.

What we experience and what we believe and what we see and what we feel occur not on their own and are certainly not known through methods of scientific empiricism but occur within every day social realities. These social realities are reflected in the social and cultural experiences that we frequently try on Guam to understand and sometimes through historical and external pressures, to create and maintain. These expressions of cultural attributes reflect Dilthey’s ideas of human freedom and, I think you could say, self-determination in the sense that one is free to respond to circumstances rather ‘from’ them. The social, historical, and cultural conditions that underwrite these actions can be known through social means of inquiry. These conditions can often be understood using epistemologies and hermeneutics that in themselves are socially and culturally based and influenced. Can we then ask: • How is Guam’s history there? • What is it like? While hermeneutics is concerned with the practice and theory of interpretation, an ontological way of looking at the world is more concerned with dealing directly with the nature of being and existence. Perhaps we could look at ontology as an applied metaphysics. We are linguistically and historically human beings. We do not exist and live out our time on earth simply through an abstract sense of this time but rather, we are that time and we are the history that that time produces. This makes the process of constructing meaning very much metaphysical in nature. No amount of empirical inquiry will solve this dilemma of understanding our past and thus our present. And that is why in social and cultural contexts, there are many disparate qualitative approaches to research with the elements of hermeneutics, epistemology, and ontology being merely aspects of certain approaches to knowing human culture and society.

Efforts to understand the past have much larger questions at stake than simply which side of Guam Magellan landed on or whether the US government decided to simply abandon Guam to the Japanese at the beginning of America’s involvement in World War II or how many petitions for self-government and/or American citizenship were actually sent or attempted to be sent to the federal government. There is a metaphysical nature in attempts to understand Guam’s past (or the entire Marianas archipelago for that matter) that is imprecise by its very nature and through the human vehicle by which these attempts are made. These efforts to understand Guam’s 2nd Marianas History Conference 2013 ・ !213