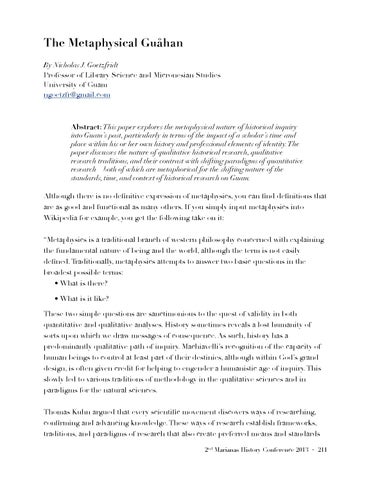 Abstract: This paper explores the metaphysical nature of historical inquiry into Guam’s past, particularly in terms of the impact of a scholar’s time and place within his or her own history and professional elements of identity. The paper discusses the nature of qualitative historical research, qualitative research traditions, and their contrast with shifting paradigms of quantitative research – both of which are metaphorical for the shifting nature of the standards, time, and context of historical research on Guam. Although there is no definitive expression of metaphysics, you can find definitions that are as good and functional as many others. If you simply input metaphysics into Wikipedia for example, you get the following take on it:

“Metaphysics is a traditional branch of western philosophy concerned with explaining the fundamental nature of being and the world, although the term is not easily defined. Traditionally, metaphysics attempts to answer two basic questions in the broadest possible terms: • What is there? • What is it like? These two simple questions are sanctimonious to the quest of validity in both quantitative and qualitative analyses. History sometimes reveals a lost humanity of sorts upon which we draw messages of consequence. As such, history has a predominantly qualitative path of inquiry. Machiavelli’s recognition of the capacity of human beings to control at least part of their destinies, although within God’s grand design, is often given credit for helping to engender a humanistic age of inquiry. This slowly led to various traditions of methodology in the qualitative sciences and in paradigms for the natural sciences.