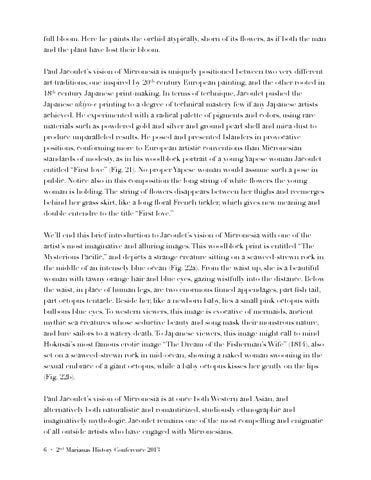 full bloom. Here he paints the orchid atypically, shorn of its flowers, as if both the man and the plant have lost their bloom.

Paul Jacoulet’s vision of Micronesia is uniquely positioned between two very different art traditions, one inspired by 20th century European painting, and the other rooted in 18th century Japanese print-making. In terms of technique, Jacoulet pushed the Japanese ukiyo-e printing to a degree of technical mastery few if any Japanese artists achieved. He experimented with a radical palette of pigments and colors, using rare materials such as powdered gold and silver and ground pearl shell and mica dust to produce unparalleled results. He posed and presented Islanders in provocative positions, conforming more to European artistic conventions than Micronesian standards of modesty, as in his woodblock portrait of a young Yapese woman Jacoulet entitled “First love” (Fig. 21). No proper Yapese woman would assume such a pose in public. Notice also in this composition the long string of white flowers the young woman is holding. The string of flowers disappears between her thighs and reemerges behind her grass skirt, like a long floral French tickler, which gives new meaning and double entendre to the title “First love.”

We’ll end this brief introduction to Jacoulet’s vision of Micronesia with one of the artist’s most imaginative and alluring images. This woodblock print is entitled “The Mysterious Pacific,” and depicts a strange creature sitting on a seaweed-strewn rock in the middle of an intensely blue ocean (Fig. 22a). From the waist up, she is a beautiful woman with tawny orange hair and blue eyes, gazing wistfully into the distance. Below the waist, in place of human legs, are two enormous finned appendages, part fish tail, part octopus tentacle. Beside her, like a newborn baby, lies a small pink octopus with bulbous blue eyes. To western viewers, this image is evocative of mermaids, ancient mythic sea creatures whose seductive beauty and song mask their monstrous nature, and lure sailors to a watery death. To Japanese viewers, this image might call to mind Hokusai’s most famous erotic image “The Dream of the Fisherman’s Wife” (1814), also set on a seaweed-strewn rock in mid-ocean, showing a naked woman swooning in the sexual embrace of a giant octopus, while a baby octopus kisses her gently on the lips (Fig. 22b).

Paul Jacoulet’s vision of Micronesia is at once both Western and Asian, and alternatively both naturalistic and romanticized, studiously ethnographic and imaginatively mythologic. Jacoulet remains one of the most compelling and enigmatic of all outside artists who have engaged with Micronesians.  6 ! ・ 2nd Marianas History Conference 2013