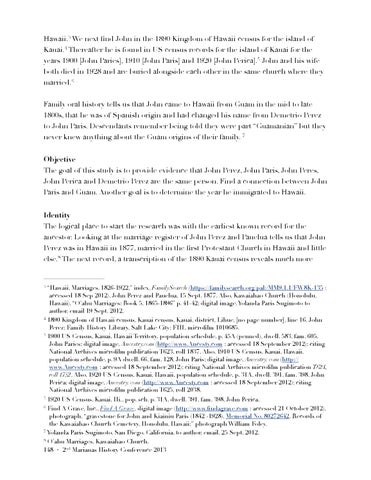 Family oral history tells us that John came to Hawaii from Guam in the mid to late 1800s, that he was of Spanish origin and had changed his name from Demetrio Perez to John Paris. Descendants remember being told they were part “Guamanian” but they never knew anything about the Guam origins of their family. 7

Objective The goal of this study is to provide evidence that John Perez, John Paris, John Peres, John Perica and Demetrio Perez are the same person. Find a connection between John Paris and Guam. Another goal is to determine the year he immigrated to Hawaii.

Identity The logical place to start the research was with the earliest known record for the ancestor. Looking at the marriage register of John Perez and Pauelua tells us that John Perez was in Hawaii in 1877, married in the first Protestant Church in Hawaii and little else.8 The next record, a transcription of the 1890 Kauai census reveals much more