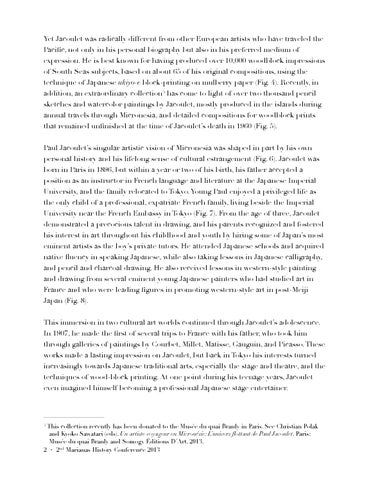 Yet Jacoulet was radically different from other European artists who have traveled the Pacific, not only in his personal biography but also in his preferred medium of expression. He is best known for having produced over 10,000 woodblock impressions of South Seas subjects, based on about 65 of his original compositions, using the technique of Japanese ukiyo-e block-printing on mulberry paper (Fig. 4). Recently, in addition, an extraordinary collection3 has come to light of over two thousand pencil sketches and watercolor paintings by Jacoulet, mostly produced in the islands during annual travels through Micronesia, and detailed compositions for woodblock prints that remained unfinished at the time of Jacoulet’s death in 1960 (Fig. 5).

Paul Jacoulet’s singular artistic vision of Micronesia was shaped in part by his own personal history and his lifelong sense of cultural estrangement (Fig. 6). Jacoulet was born in Paris in 1896, but within a year or two of his birth, his father accepted a position as an instructor in French language and literature at the Japanese Imperial University, and the family relocated to Tokyo. Young Paul enjoyed a privileged life as the only child of a professional, expatriate French family, living beside the Imperial University near the French Embassy in Tokyo (Fig. 7). From the age of three, Jacoulet demonstrated a precocious talent in drawing, and his parents recognized and fostered his interest in art throughout his childhood and youth by hiring some of Japan’s most eminent artists as the boy’s private tutors. He attended Japanese schools and acquired native fluency in speaking Japanese, while also taking lessons in Japanese calligraphy, and pencil and charcoal drawing. He also received lessons in western-style painting and drawing from several eminent young Japanese painters who had studied art in France and who were leading figures in promoting western-style art in post-Meiji Japan (Fig. 8).

This immersion in two cultural art worlds continued through Jacoulet’s adolescence. In 1907, he made the first of several trips to France with his father, who took him through galleries of paintings by Courbet, Millet, Matisse, Gauguin, and Picasso. These works made a lasting impression on Jacoulet, but back in Tokyo his interests turned increasingly towards Japanese traditional arts, especially the stage and theatre, and the techniques of wood-block printing. At one point during his teenage years, Jacoulet even imagined himself becoming a professional Japanese stage entertainer.