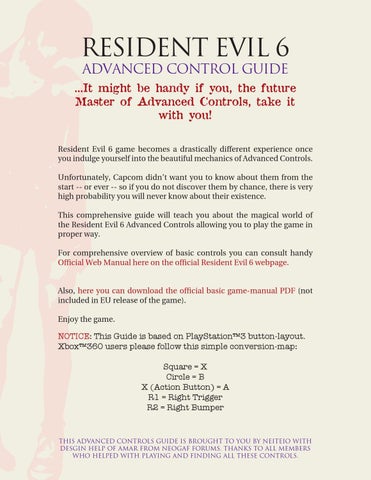 ...It might be handy if you, the future Master of Advanced Controls, take it with you! Resident Evil 6 game becomes a drastically different experience once you indulge yourself into the beautiful mechanics of Advanced Controls. Unfortunately, Capcom didn’t want you to know about them from the start -- or ever -- so if you do not discover them by chance, there is very high probability you will never know about their existence. This comprehensive guide will teach you about the magical world of the Resident Evil 6 Advanced Controls allowing you to play the game in proper way. For comprehensive overview of basic controls you can consult handy Official Web Manual here on the official Resident Evil 6 webpage. Also, here you can download the official basic game-manual PDF (not included in EU release of the game). Enjoy the game.

This Advanced Controls Guide is brought to you by NeiteIo with desgin help of amar from NeoGAF forums. Thanks to all members who helped with playing and finding all these controls.

In RE6, you mix herbs into pills, which are then dispensed Tic-Tac-style with a press of R2. The number of times you tap, the number of pills you use, each pill restoring a slice of health, effectively allowing you to manage your health bar by bar. This shortcut -- R2 + Square -- instantly combines any herbs in your inventory, red herbs included, and loads the pills into your case, rather than you having to do each step manually. This is extremely useful.

Snipers got you down? Aim at the sniper -- or any enemy target, for that matter -- and tap Circle to paint the target. A red marker will appear over it and that enemy will become the sole target of your AI partner, which is useful since your AI partner is virtually indestructible outside of rare one-hit boss kills, and your partner also has unlimited ammo.

RE6 is NOT a cover shooter. Like Vanquish, you&#39;re playing it wrong if you&#39;re hiding behind cover rather than advancing the fight, throwing yourself into the fray to unleash a flurry of melee moves. That being said, your dedicated melee button -- R1 -- is governed by a stamina meter (also like Vanquish): kick and punch too much, and you&#39;ll grow tired and hit like a sissy. THIS is when you take cover: slide to the nearest wall to instantly snap to cover, and wait a moment while your stamina bar replenishes in a matter of mere seconds. Very useful! Alternatively, you can lie prone to quickly regain stamina (L1 + X + a direction to dive/roll to the ground, holding L1 to lie prone).

• Elbow backwards, OR aim for the head, OR melee twice

RE6 has an insane variety of context-sensitive melee moves -- they even change with your equipped weapon! For starters, you can melee people standing directly behind you by simply hitting R1 to elbow them in the head, dazing them to set up over-the-top melee takedowns. While good for crowd control, normally you&#39;ll be facing enemies head-on, in which case you want to do one of two things: Pop the enemy in the head, usually just once, then run up close and hit R1 to unleash a context-sensitive melee move like a suplex; OR run up to an enemy and hit them twice with a basic melee move (usually kicks), dazing them for a context-sensitive melee move on the third hit. This may knock them to the ground, in which case you should quickly run up to their head and hit R1 a fourth time for a skull-crushing stomp.

• Dash with Action button (X on PS3), then hit L1 to slide • To spin 180 degrees mid-slide, pull back while sliding • To shoot while sliding, tap R1 Sliding is a brilliant new mechanic that frankly makes the previous REs feel stiff by comparison. Just the other night, in Jake&#39;s Chapter 4, I was repeatedly sliding under an enemy&#39;s near-fatal swing; others have even slid under incoming projectiles like busses thrown by giants! But sliding is more than simply dashing with the Action button and hitting L1. You can do a 180-degree turn while sliding by pulling back on the analog stick, and you can fire (or swipe) to daze and kill while sliding toward or under enemies. Sliding into enemies can also trip them. You can even slide past a pack of enemies, drop remote bombs as you slide by, and then detonate them as you roll back to your feet, a cloud of meaty chunks raining down behind you! ALSO: You can also do a quick slide from a stationary position by hitting forward + Action + L1. Normally you can only slide if you&#39;re sprinting first, but you can do it this way if you need to slide real quick out of the way.

• Aim with L1, then tap Action button and left or right to roll in that direction • Release L1 mid-roll to stand, or continue to hold L1 to lie on the ground • On the ground, tap left and right to roll Each enemy J&#39;avo has three or four different mutations per limb, as well as their heads and torsos, and these mutations can stack, which means enemies have a LOT of ways to attack you. Sometimes, when swarmed in tight spaces, you&#39;ll want to roll out of the way of an incoming attack -- also good for confusing hordes of zombies as they try to track you. Aiming and then tapping the Action button and left or right will throw you rolling in that direction; releasing L1 the moment you hit the ground will cause you to immediately barrel-roll to your feet. Likewise with throwing yourself backwards away from enemies, or rolling forward (with respective directional taps of the analog). If you don&#39;t release L1, you&#39;ll stay on your back on the ground, at which point you can tap left or right to roll on the ground (as though you&#39;re on fire and trying to put yourself out). You can literally circle attacking enemies this way!

• Aim and hit the Action button while standing

This quick crouching animation allows you to duck under many enemy attacks. It’s near-instantaneous, though, meaning you must use it the moment it’s needed. Sometimes it’s more fruitful to jump backwards to your back or roll out of the way instead! ALSO: If you hit a direction right after dodging, you can cancel the dodge into a roll/dive in that direction. Very useful if you need to get out of the way really quick.

This combination can result in a shoulder-check or other attack animation that if nothing else staggers or trips up enemies -- ideal for breaking enemy lines during a hasty escape.

• L1 + R1 when near an enemy; tap repeatedly to attack multiple nearby targets

This is another brilliant mechanic, absolutely vital for crowd control in Mercs. When near an enemy, even if the enemy is standing out of sight behind you, hit L1 and R1 to instantly turn, target and shoot the enemy. Subsequent taps will unleash additional quick shots, each consuming a bar of your stamina meter. Try it with Helena with the Hydra shotgun equipped; she’ll do a series of over-the-top tactical rolls, striking a pose to fire off a round each time. So badass! Be sure to check out an Youtubed example of Leon’s dual-wielding quick shot here!

• Timing is the key

If you see an enemy beginning its attack animation, like a zombie raising a wrench, and hit R1 (the melee button) the instant before the enemy strikes, you will obliterate that enemy with a super-flashy counter attack. The screen will flash and you’ll hear a sharp “ZING!” to indicate you did a counter (as though kicking your enemy a mile away didn’t make it clear enough)!

• Use BOTH analog sticks!

Perhaps the most frustrating QTE people encounter is the one where you have to spin the stick to fill a bar. The thing the game doesn’t tell you is that if you spin BOTH analog sticks, the bar fills up twice as fast -- completing the QTE so fast you’ll outpace the cinematic!

Another poorly communicated QTE is one involving climbing. As you alternate between button presses, the trick is to always have one button depressed -- as though you’re climbing hand over hand, one hand always on the rope.

Other Useful Tips You can switch to laser sight (instead of crosshairs) and adjust the camera and aiming speed (I recommend Camera: 2 and Aiming: 7). This game is dual-analog, meaning the camera will not simply follow you like in RE4: You must control the camera manually with the right stick or reset it with the Action button. The key is to always be on the offensive. Even against gun-toting enemies, you should roll out of the way and then slide under incoming fire, blasting away at their face and then rolling back to your feet to unleash a context-sensitive melee on them while they’re dazed. Then roll back out of the way to avoid incoming attacks, or use the Quick Shot to stun several enemies around you. Once you get into the rhythm of combat, this constant back and forth, it becomes a thing of beauty.

We hope this will help you ENJOYING RESIDENT EVIL 6 AS CAPCOM WANTED YOU TO BUT SOMEHOW FORGOT TO TELL YOU HOW. Click here for a great Mercenaries Mode run Youtube video!

See description for highlights with time stamps - they’re a bit late, so rewind each a bit! (protip part: dropping remote bombs while sliding!)