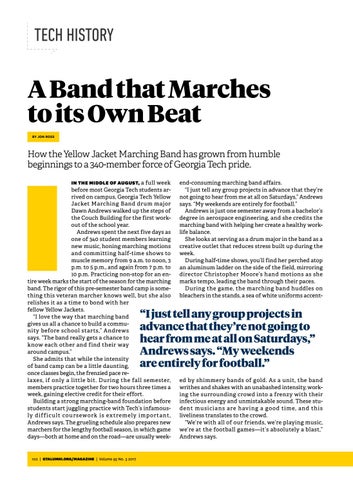 A Band that Marches to its Own Beat

I BY JON ROSS

How the Yellow Jacket Marching Band has grown from humble beginnings to a 340-member force of Georgia Tech pride. IN THE MIDDLE OF AUGUST, a full week before most Georgia Tech students arrived on campus, Georgia Tech Yellow Jacket Marching Band drum major Dawn Andrews walked up the steps of the Couch Building for the first workout of the school year. Andrews spent the next five days as one of 340 student members learning new music, honing marching motions and committing half-time shows to muscle memory from 9 a.m. to noon, 3 p.m. to 5 p.m., and again from 7 p.m. to 10 p.m. Practicing non-stop for an entire week marks the start of the season for the marching band. The rigor of this pre-semester band camp is something this veteran marcher knows well, but she also relishes it as a time to bond with her fellow Yellow Jackets. “I love the way that marching band gives us all a chance to build a community before school starts,” Andrews says. “The band really gets a chance to know each other and find their way around campus.” She admits that while the intensity of band camp can be a little daunting, once classes begin, the frenzied pace relaxes, if only a little bit. During the fall semester, members practice together for two hours three times a week, gaining elective credit for their effort. Building a strong marching-band foundation before students start juggling practice with Tech’s infamously diff icult coursework is extremely impor tant, Andrews says. The grueling schedule also prepares new marchers for the lengthy football season, in which game days—both at home and on the road—are usually week-

end-consuming marching band affairs. “I just tell any group projects in advance that they’re not going to hear from me at all on Saturdays,” Andrews says. “My weekends are entirely for football.” Andrews is just one semester away from a bachelor’s degree in aerospace engineering, and she credits the marching band with helping her create a healthy worklife balance. She looks at serving as a drum major in the band as a creative outlet that reduces stress built up during the week. During half-time shows, you’ll find her perched atop an aluminum ladder on the side of the field, mirroring director Christopher Moore’s hand motions as she marks tempo, leading the band through their paces. During the game, the marching band huddles on bleachers in the stands, a sea of white uniforms accent-

“I just tell any group projects in advance that they’re not going to hear from me at all on Saturdays,” Andrews says. “My weekends are entirely for football.” ed by shimmery bands of gold. As a unit, the band writhes and shakes with an unabashed intensity, working the surrounding crowd into a frenzy with their infectious energy and unmistakable sound. These student musicians are having a good time, and this liveliness translates to the crowd. “We’re with all of our friends, we’re playing music, we’re at the football games—it’s absolutely a blast,” Andrews says.

A publication of the Georgia Tech Alumni Association 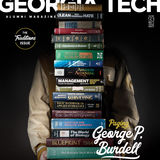