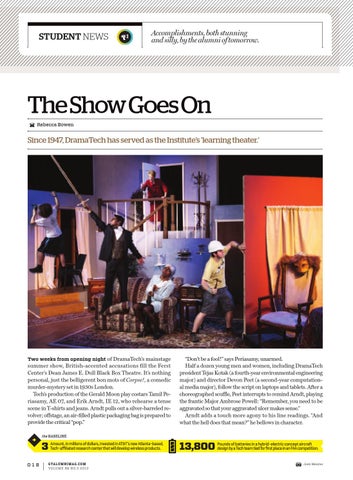 Accomplishments, both stunning and silly, by the alumni of tomorrow.

The Show Goes On Rebecca Bowen

Since 1947, DramaTech has served as the Institute’s ‘learning theater.’

“Don’t be a fool!” says Periasamy, unarmed. Half a dozen young men and women, including DramaTech president Tejas Kotak (a fourth-year environmental engineering major) and director Devon Peet (a second-year computational media major), follow the script on laptops and tablets. After a choreographed scuffle, Peet interrupts to remind Arndt, playing the frantic Major Ambrose Powell: “Remember, you need to be aggravated so that your aggravated ulcer makes sense.” Arndt adds a touch more agony to his line readings. “And what the hell does that mean?” he bellows in character.

of batteries in a hybrid-electric concept aircraft 13,800 Pounds design by a Tech team tied for first place in an FAA competition. Josh Meister

A publication of the Georgia Tech Alumni Association.

A publication of the Georgia Tech Alumni Association.