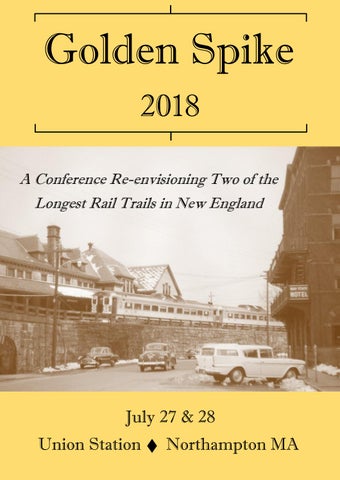 Cover photo from the collection of Craig Della Penna. Taken in the winter of 1962, it shows a fantrain trip that originated in New Haven, CT and shown here at Union Station in Northampton on its way to the end-of-track in Williamsburg, MA. The RDC Buddliner train-set is above Strong Ave along the right of way of today’s trail that is 90% open all the way to New Haven.

Golden The Rail Trail Movement by Craig Della Penna The greatest recycling project underway in our part of the world at present is the conversion of former steam railroad corridors in the US into walking and biking trails, and perhaps the densest network currently being developed in the US is right here in our backyard in southern New England. Over 200 such projects are underway within 125 miles of Northampton, making this network unique, because the projects connect at the intersection of where people live, work, and play, bringing profound positive change to the neighborhoods fortunate enough to host them.

Many of the former steam railroad corridors in this region connect to large numbers of vacant mill complexes in the so-called “Gateway Cities” such as Lowell, Lawrence, Springfield, Holyoke, and Brockton that experienced economic decline and disinvestment in for over two generations. Since the time that the mills closed down, the former railroad corridors in these places were abandoned as well—neglected destinations until being repurposed as linear parks. Smart Growth, a state planning policy, epitomizes the development of this network as an opportunity to build walkable and bikeable communities, so that if you do not see cyclists and pedestrians as commonplace users in your community then you know that it’s time to get involved and make plans.

In southern New England, the origins of these conversions can be traced back to two projects—both on Cape Cod in the 1970s. The Shining Sea Trail in Falmouth/Woods Hole and the Cape Cod Rail Trail (CCRT) that stretches through several communities further out on the Cape. The CCRT was the first long rail trail project done by a state parks agency in the Northeast. It was put specifically in an area where tourists are welcomed for economic development purposes, though no one thought it would become the seed of an idea that people brought back home to their communities. 4

Spike The Shining Sea Trail is important because the policy regulations that came about as a result of the conversion has allowed for more ease in Massachusetts trail development. The roots of Rails-to-Trails Conservancy (RTC) can be traced back to the efforts in Falmouth/Woods Hole by Barbara Burwell, mother of David Burwell, who later founded RTC based on the need for a clearinghouse of information about how to do this work. You can read about this trail and how it was eventually built: https://bit.ly/2uoJKxD

The Golden Spike Conference celebrates, connects, and continues the hard work of those early advocates for rail trail networks. We will offer forums for community leaders and organizations to share information and experience; various tours and activities to further increase awareness and understanding of rail trail networks; and other resources to help expand the impact of such projects.

Golden The Golden Spike conference brings together rail trail advocates, transportation and legislative policy makers and trail users from both Connecticut and Massachusetts and will feature a panel presentation of the current rail trail system from Boston to Northampton and also Northampton to New Haven. We will share the positive developments along specific segments and also the design challenges of the 190 mile trail system. The location of the conference is symbolic because it is the intersection of the two trail networks; both trail mile-markers originate at Union Station and signage indicates 0.0 miles in both directions. The 84 mile N-S line from New Haven to Northampton is about 90% complete as a trail while the 110 E-W line from Boston to Northampton is about 40% open as a trail in several segments. Once completed this 190-mile intra-state trail will have a major impact to the two states in terms of recreation and quality of life as well as the economic benefits from increased spending through tourism and residents. The development of the N–S trail from Northampton to New Haven coincides with the expansion of the Amtrak passenger rail system from New Haven through Hartford, Springfield, Northampton and beyond. The increased tourist activity via the alignment of these two non-vehicular transportation networks will have major economic impacts in the years ahead. Massachusetts currently has a quality rail trail system and an active network of advocates, however, the completion of the east-west MCRT and further expansion of local spurs is challenging because of the lack of statewide fiscal, operational and planning oversight. The “balkanization” of rail-trail development has put the burden on individual towns rather than county, regional or statewide bodies. The Golden Spike conference will highlight the positive recreational, health, and economic impacts of the current trail system and also identify the specific challenges to be addressed in order to complete the MCRT and the New Haven to Northampton trail. This furthers the goal of DCR’s strategic plan by focusing attention on the critical issue of completing the Mass Central Rail Trail. 6

Spike The 2018 Golden Spike Conference is an opportunity to facilitate dialogue and share critical information around the myriad beneficial impacts that trails provide for residents and municipalities. Inspiring and generating support of a fully connected trail network that has the ability to elevate social interaction and economic benefits for residents and businesses throughout Massachusetts and Connecticut is one impact weâ&amp;#x20AC;&amp;#x2122;re hoping to achieve. Enhancing public health through recreational trail activities and mitigating outputs through human powered, sustainable transportation while addressing issues of equity through non -motorized transport is a goal that lawmakers, businesses, and residents share. The GS conference intends to be the forum to explore the necessary steps to bridge any and all gaps along the east-west and north-south trail corridors. We know that a connected trail not only increases tourism potential but fosters a deeper sense of community participation that creates more advocacy for the preservation of greenways along these corridors. The panel presentation at the conference will highlight the specific portions of the MCRT and the New Haven to Northampton trails that are most challenging to complete. Both trail systems are interrupted by short under-developed sections. Developing a shared awareness of these crucial missing links will support a coordinated effort by state officials and local trail advocates to address these gaps in both states. Even though the Governors of each state are fully behind the completion of these trails many communities still lack the political consensus to support trail development. The Golden Spike conference aims to promote and detail the tools and strategies used by communities to establish advocacy groups and successful funding collaborations with both public and private entities.

Kurt Gaertner is the Director of Land Policy and Planning for the Executive Office of Energy and Environmental Affairs (EEA). In that capacity he is responsible for land use and land conservation policies and programs, seeking to promote sustainable development and reduce land, energy, and natural resource consumption. Kurt also serves as the Secretaryâ&amp;#x20AC;&amp;#x2122;s designee on the Massachusetts Bicycle and Pedestrian Advisory Board, and represents the agency on the Governorâ&amp;#x20AC;&amp;#x2122;s Trails Team. He is also an adjunct faculty member at Boston University in their City Planning and Urban Affairs Program, where he has taught since 2009.

Explore the path of the Mill River from Smith College to Licking Water, downtown before it was diverted away from the city center in 1940. At each stop along the way, local experts will reveal bits of history about the particular location and archival photos and maps will be explained.

John Sinton is one of the principals of the Mill River Greenway Initiative whose mission is to design and create a greenway along the Mill River that protects the watershed, preserves cultural artifacts and encourages recreational activities. John is a trained historian and is currently writing a book on the history of the Mill River.

Participate in a guided, walking tour of the recently revamped gateway to downtown Northampton. This stretch of Pleasant Street recently upgraded to meet new MA DOT standards incorporates a variety of Complete Street safety and design features that provide safety and accessibility for all users of all abilities including pedestrians, bicyclists, transit riders and motorists.

Find out the key ingredients and factors that have made Northampton one of the top 20 â&amp;#x20AC;&amp;#x153;Small Citiesâ&amp;#x20AC;? in the country. Join us as we explore the historical, economic and cultural developments that can serve as examples for other small New England cities.

Cahillane is the Director of the Downtown Northampton Association and a huge advocate of livable downtowns that embrace and capitalize on the energy of diverse businesses and residents.

Elizabeth Sharpe is the Co-Director of Historic Northampton in addition to teaching a variety of history courses at UMass Amherst and other local colleges.

Join us on this 5 mile bike ride as we explore some of the significant historical sites of Florenceâ&amp;#x20AC;&amp;#x2122;s mid 1800s Abolitionist and Utopian Communities. Stories of Sojourner Truth, the Underground Railroad, the early Silk Mill industries and Water Cures will highlight this tour.

Steve Strimer serves on the Board of the David Ruggles Center and Historic Northampton while also working full-time at the worker-owned Collective Copies and assisting local authors through Levellers Press. During his free time Steve has developed and leads tours of the African American Heritage trail in Florence that highlights the life of Sojourner Truth. Supporting Steve with the tour will be Board Members of the David Ruggles Center: Suzanne 15 Love Goldscheider and Tom Goldscheider.

The Manhan Rail Trail (Easthampton) Follow the remains of the 1829 canal from New Haven to Northampton and later a railroad that today has become one of the states treasured rail-trails. Explore the natural highlights of the area while learning about the funding and engineering strategies of the trailâ&amp;#x20AC;&amp;#x2122;s development.

Steve Donnelly is the long time Clerk of the Friends of the Manhan Rail Trail and the Manhan Rail Trail Committee. He is an IT Consultant for the Life Insurance Industry and has degrees from HCC and Westfield State University, as well as an MBA from Western New England University. A history buff, Steve is a regular contributor to the Historical Journal of 16 Massachusetts.

Mass Central Rail Trail’s Norwottuck Segment Explore one of the key segments of the MCRT that connects the UMass Amherst campus with local communities. Enjoy great views of the CT. River and local farmlands while the tour leaders describe the challenges and successes of this trail’s development.

Pete Sutton is the MassDOT&#39;s Bicycle and Pedestrian Program Coordinator. He is a big advocate of alternative transportation models and is Chairman of the Commonwealth’s Pedestrian and Bicycle Advisory Committee Paul Jahnige is the MA. DCR Director of Greenways and Trails. He is a wealth of information on the development of the MCRT.

Paul Jahnige is the MA. DCR Director of Greenways and Trails. He is a wealth of information on the development of the MCRT system.

Laurie Sanders is the Co-Director of Historic Northampton in addition to being an awardwinning naturalist and community organizer. 18

Join us on this 11 mile loop along the rail trail that crosses the villages of Florence, Leeds and Haydenville. The tour leader will describe the many partners who came together since 1985 to envision, fund and design one of the oldest segments of the trail system in MA.

Craig Della Penna is the volunteer coordinator of the MCRT Coalition and a nationally known advocate for repurposing abandoned railways for multi-purpose rail trails. Craig, a historian by training also owns a bed &amp; breakfast on the Florence segment of the Northampton rail trail. 19

George Kohout, Friends of the Northampton Trails and Greenways

Kris Badertscher, Friends of the Northampton Trails and Greenways