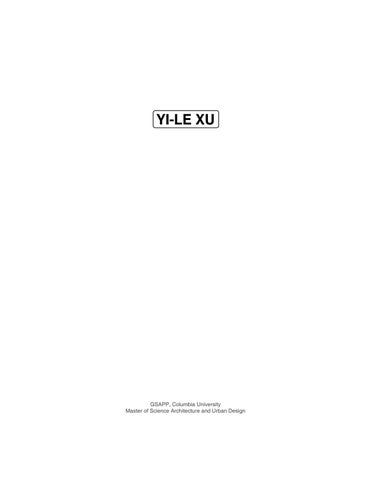 Nowadays, some urgent problems need to be solved, such as the inequality of gender, race, and occupation between people, the destruction of the natural environment by industrial development, and the brutal treatment of other lives, the mistreatment, the indiscriminate hunting of animals. All these problems are caused by the pyramid structure of inequality. People or industry at the top exploit the resources of others and the natural environment. But in an ideal world, every person and every life should be equal and respected by each other, all lives should be of no distinction between high and low. Therefore, we should try our best to solve the problems caused by these imbalances and turn the world into a circular structure in which all life supports and relies on each other instead of ruling and dominating. In this way, human beings can develop for a longer time. So as an architect, how can we guide people to make changes in the way of architecture?

These Routes Are Made For Walking

The population density in Jersey City and Hoboken is rapidly increasing. At the same time, climate change and poor drainage systems also plague these two cities. These problems create multiple interrelated issues like a lack of open space and a need for flood mitigation. On the other hand, there are many vacant lots in the city fabric, both private and public. This design proposal focuses on borrowing private lots over a period of time to create temporary pop up spaces and redesigning permanent vacant spaces to resolve flash flood issues on publicly owned lots.

08 After School Pop Up

07 After School Pop Up

05 After School Pop Up

06 Events Pop Up B Water Plaza

Dady, Can I go to the Playground Pop-up with my friends?

I come to Water Plaza every day to exercise!

The climbing wall is interesting. I want to have a try !

Events Pop-up Can I borrow books from reading pop-ups?

There are many religious books in this reading pop-up.

Sprawl has been one of the major contributors to the increase in carbon emissions in Hudson Valley, due to its dependence on private vehicles, and by replacing natural carbon sequestering landscapes with lawns. Our strategies address both effects simultaneously. The infrastructure is already there, all we need to do is update and equip it to actually serve its purpose: connect. By providing residents with low-carbon mobility options, more activity nodes, and creating room for green corridors in the isolated communities, we follow the Green New Dael’s goal of “removing greenhouse gases from the atmosphere and reducing pollution by restoring natural ecosystems through proven low-tech solutions that increase soil carbon storage”. But mainly, we intend to present an alternative lifestyle where the boundaries of our daily routine and connecting with nature are dissolved.

Changsha is located in Southern China. It is the capital of Hunan Province. It has around 3000 years of hiistory. At the begining, the city originated from a river flush plain and developed river transportation and agriculture. After 1900s, the city started developing railways and commerce. Nowadays, Changsha 11 satellite cities and connecting with Zhuzhou and Xiangtan, formed as a mega city. In this class, we did a research of this city, and combined with four city models: Arche-Citta, Cine-Citta, Tele-Cita and Mega city.