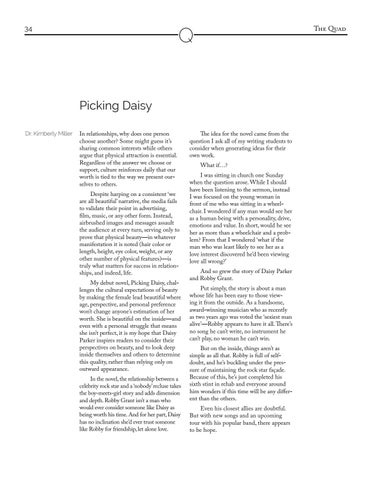 In relationships, why does one person choose another? Some might guess it’s sharing common interests while others argue that physical attraction is essential. Regardless of the answer we choose or support, culture reinforces daily that our worth is tied to the way we present ourselves to others.

Despite harping on a consistent ‘we are all beautiful’ narrative, the media fails to validate their point in advertising, film, music, or any other form. Instead, airbrushed images and messages assault the audience at every turn, serving only to prove that physical beauty—in whatever manifestation it is noted (hair color or length, height, eye color, weight, or any other number of physical features)—is truly what matters for success in relationships, and indeed, life.

My debut novel, Picking Daisy, challenges the cultural expectations of beauty by making the female lead beautiful where age, perspective, and personal preference won’t change anyone’s estimation of her worth. She is beautiful on the inside—and even with a personal struggle that means she isn’t perfect, it is my hope that Daisy Parker inspires readers to consider their perspectives on beauty, and to look deep inside themselves and others to determine this quality, rather than relying only on outward appearance.

In the novel, the relationship between a celebrity rock star and a ‘nobody’ recluse takes the boy-meets-girl story and adds dimension and depth. Robby Grant isn’t a man who would ever consider someone like Daisy as being worth his time. And for her part, Daisy has no inclination she’d ever trust someone like Robby for friendship, let alone love.

The idea for the novel came from the question I ask all of my writing students to consider when generating ideas for their own work. What if…?

I was sitting in church one Sunday when the question arose. While I should have been listening to the sermon, instead I was focused on the young woman in front of me who was sitting in a wheelchair. I wondered if any man would see her as a human being with a personality, drive, emotions and value. In short, would he see her as more than a wheelchair and a problem? From that I wondered ‘what if the man who was least likely to see her as a love interest discovered he’d been viewing love all wrong?’ And so grew the story of Daisy Parker and Robby Grant.

Put simply, the story is about a man whose life has been easy to those viewing it from the outside. As a handsome, award-winning musician who as recently as two years ago was voted the ‘sexiest man alive’—Robby appears to have it all. There’s no song he can’t write, no instrument he can’t play, no woman he can’t win. But on the inside, things aren’t as simple as all that. Robby is full of selfdoubt, and he’s buckling under the pressure of maintaining the rock star façade. Because of this, he’s just completed his sixth stint in rehab and everyone around him wonders if this time will be any different than the others. Even his closest allies are doubtful. But with new songs and an upcoming tour with his popular band, there appears to be hope. 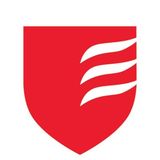 The Quad is published quarterly by students of Grove City College.

The Quad is published quarterly by students of Grove City College.