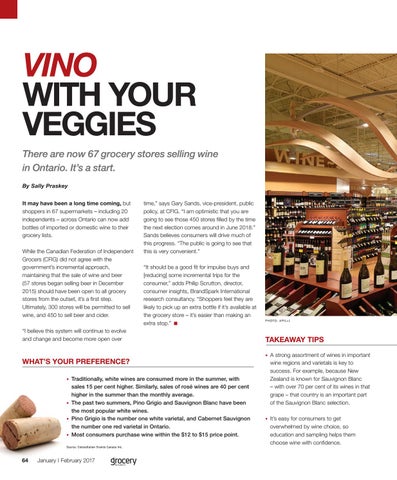 VINO WITH YOUR VEGGIES There are now 67 grocery stores selling wine in Ontario. It’s a start. By Sally Praskey It may have been a long time coming, but shoppers in 67 supermarkets – including 20 independents – across Ontario can now add bottles of imported or domestic wine to their grocery lists. While the Canadian Federation of Independent Grocers (CFIG) did not agree with the government’s incremental approach, maintaining that the sale of wine and beer (57 stores began selling beer in December 2015) should have been open to all grocery stores from the outset, it’s a first step. Ultimately, 300 stores will be permitted to sell wine, and 450 to sell beer and cider.

time,” says Gary Sands, vice-president, public policy, at CFIG. “I am optimistic that you are going to see those 450 stores filled by the time the next election comes around in June 2018.” Sands believes consumers will drive much of this progress. “The public is going to see that this is very convenient.” “It should be a good fit for impulse buys and [reducing] some incremental trips for the consumer,” adds Philip Scrutton, director, consumer insights, BrandSpark International research consultancy. “Shoppers feel they are likely to pick up an extra bottle if it’s available at the grocery store – it’s easier than making an extra stop.”

WHAT’S YOUR PREFERENCE? • Traditionally, white wines are consumed more in the summer, with sales 15 per cent higher. Similarly, sales of rosé wines are 40 per cent higher in the summer than the monthly average. • The past two summers, Pino Grigio and Sauvignon Blanc have been the most popular white wines. • Pino Grigio is the number one white varietal, and Cabernet Sauvignon the number one red varietal in Ontario. • Most consumers purchase wine within the $12 to $15 price point. Source: Constellation Brands Canada Inc.

TAKEAWAY TIPS • A strong assortment of wines in important wine regions and varietals is key to success. For example, because New Zealand is known for Sauvignon Blanc – with over 70 per cent of its wines in that grape – that country is an important part of the Sauvignon Blanc selection. • It’s easy for consumers to get overwhelmed by wine choice, so education and sampling helps them choose wine with confidence. 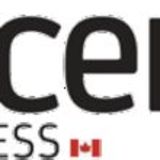