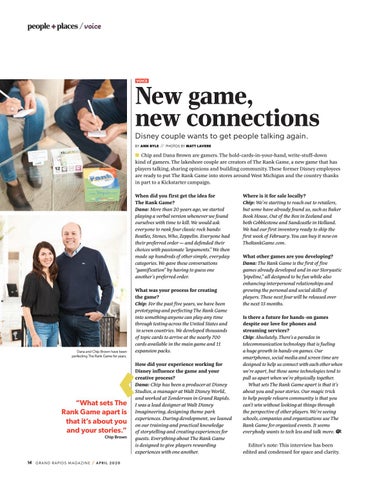 Chip and Dana Brown are gamers. The hold-cards-in-your-hand, write-stuff-down kind of gamers. The lakeshore couple are creators of The Rank Game, a new game that has players talking, sharing opinions and building community. These former Disney employees are ready to put The Rank Game into stores around West Michigan and the country thanks in part to a Kickstarter campaign. When did you first get the idea for The Rank Game? Dana: More than 20 years ago, we started playing a verbal version whenever we found ourselves with time to kill. We would ask everyone to rank four classic rock bands: Beatles, Stones, Who, Zeppelin. Everyone had their preferred order — and defended their choices with passionate &quot;arguments.&quot; We then made up hundreds of other simple, everyday categories. We gave these conversations “gamification” by having to guess one another’s preferred order.

Dana and Chip Brown have been perfecting The Rank Game for years.

“What sets The Rank Game apart is that it’s about you and your stories.” Chip Brown

What was your process for creating the game? Chip: For the past five years, we have been prototyping and perfecting The Rank Game into something anyone can play any time through testing across the United States and in seven countries. We developed thousands of topic cards to arrive at the nearly 700 cards available in the main game and 11 expansion packs. How did your experience working for Disney influence the game and your creative process? Dana: Chip has been a producer at Disney Studios, a manager at Walt Disney World, and worked at Zondervan in Grand Rapids. I was a lead designer at Walt Disney Imagineering, designing theme park experiences. During development, we leaned on our training and practical knowledge of storytelling and creating experiences for guests. Everything about The Rank Game is designed to give players rewarding experiences with one another.

Where is it for sale locally? Chip: We’re starting to reach out to retailers, but some have already found us, such as Baker Book House, Out of the Box in Zeeland and both Cobblestone and Sandcastle in Holland. We had our first inventory ready to ship the first week of February. You can buy it now on TheRankGame.com. What other games are you developing? Dana: The Rank Game is the first of five games already developed and in our Storyastic &quot;pipeline,&quot; all designed to be fun while also enhancing interpersonal relationships and growing the personal and social skills of players. These next four will be released over the next 15 months. Is there a future for hands-on games despite our love for phones and streaming services? Chip: Absolutely. There’s a paradox in telecommunication technology that is fueling a huge growth in hands-on games. Our smartphones, social media and screen time are designed to help us connect with each other when we&#39;re apart, but those same technologies tend to pull us apart when we’re physically together. What sets The Rank Game apart is that it’s about you and your stories. Our magic trick to help people relearn community is that you can’t win without looking at things through the perspective of other players. We’re seeing schools, companies and organizations use The Rank Game for organized events. It seems everybody wants to tech less and talk more. Editor’s note: This interview has been edited and condensed for space and clarity. 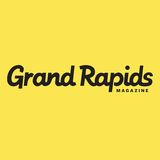