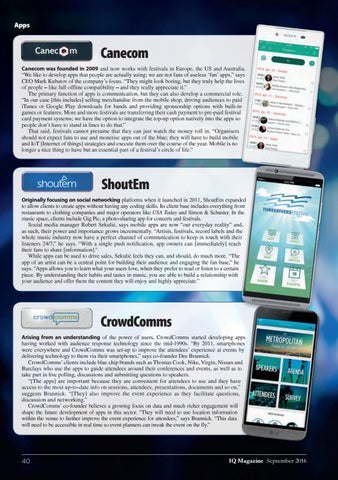 Canecom Canecom was founded in 2009 and now works with festivals in Europe, the US and Australia. “We like to develop apps that people are actually using; we are not fans of useless ‘fun’ apps,” says CEO Mark Kubatov of the company’s focus. “They might look boring, but they truly help the lives of people – like full offline compatibility – and they really appreciate it.” The primary function of apps is communication, but they can also develop a commercial role. “In our case [this includes] selling merchandise from the mobile shop, driving audiences to paid iTunes or Google Play downloads for bands and providing sponsorship options with built-in games or features. More and more festivals are transferring their cash payment to pre-paid festival card payment systems; we have the option to integrate the top-up option natively into the apps so people don’t have to stand in lines to do that.” That said, festivals cannot presume that they can just watch the money roll in. “Organisers should not expect fans to use and monetise apps out of the blue; they will have to build mobile and IoT [Internet of things] strategies and execute them over the course of the year. Mobile is no longer a nice thing to have but an essential part of a festival’s circle of life.”

ShoutEm Originally focusing on social networking platforms when it launched in 2011, ShoutEm expanded to allow clients to create apps without having any coding skills. Its client base includes everything from restaurants to clothing companies and major operators like USA Today and Simon & Schuster. In the music space, clients include Gig Pic, a photo-sharing app for concerts and festivals. Social media manager Robert Sekulić, says mobile apps are now “our everyday reality” and, as such, their power and importance grows incrementally. “Artists, festivals, record labels and the whole music industry now have a perfect channel of communication to keep in touch with their listeners 24/7,” he says. “With a single push notification, app owners can [immediately] reach their fans to share [information].” While apps can be used to drive sales, Sekulić feels they can, and should, do much more. “The app of an artist can be a central point for building their audience and engaging the fan base,” he says. “Apps allows you to learn what your users love, when they prefer to read or listen to a certain piece. By understanding their habits and tastes in music, you are able to build a relationship with your audience and offer them the content they will enjoy and highly appreciate.”

CrowdComms Arising from an understanding of the power of users, CrowdComms started developing apps having worked with audience response technology since the mid-1990s. “By 2011, smartphones were everywhere and CrowdComms was set-up to improve the attendees’ experience at events by delivering technology to them via their smartphones,” says co-founder Dee Brannick. CrowdComms’ clients include blue chip brands such as Thomas Cook, Nike, Virgin, Nissan and Barclays who use the apps to guide attendees around their conferences and events, as well as to take part in live polling, discussions and submitting questions to speakers. “[The apps] are important because they are convenient for attendees to use and they have access to the most up-to-date info on sessions, attendees, presentations, documents and so on,” suggests Brannick. “[They] also improve the event experience as they facilitate questions, discussion and networking.” CrowdComms’ co-founder believes a growing focus on data and much richer engagement will shape the future development of apps in this sector. “They will need to use location information within the venue to further improve the event experience for attendees,” says Brannick. “This data will need to be accessible in real time so event planners can tweak the event on the fly.”