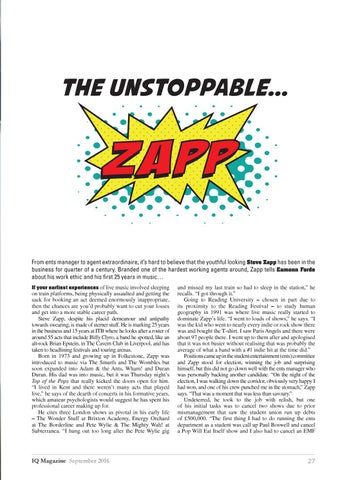 Zapp From ents manager to agent extraordinaire, it’s hard to believe that the youthful looking Steve Zapp has been in the business for quarter of a century. Branded one of the hardest working agents around, Zapp tells Eamonn Forde about his work ethic and his first 25 years in music… If your earliest experiences of live music involved sleeping on train platforms, being physically assaulted and getting the sack for booking an act deemed enormously inappropriate, then the chances are you’d probably want to cut your losses and get into a more stable career path. Steve Zapp, despite his placid demeanour and antipathy towards swearing, is made of sterner stuff. He is marking 25 years in the business and 15 years at ITB where he looks after a roster of around 55 acts that include Biffy Clyro, a band he spotted, like an alt-rock Brian Epstein, in The Cavern Club in Liverpool, and has taken to headlining festivals and touring arenas. Born in 1973 and growing up in Folkestone, Zapp was introduced to music via The Smurfs and The Wombles but soon expanded into Adam & the Ants, Wham! and Duran Duran. His dad was into music, but it was Thursday night’s Top of the Pops that really kicked the doors open for him. “I lived in Kent and there weren’t many acts that played live,” he says of the dearth of concerts in his formative years, which amateur psychologists would suggest he has spent his professional career making up for. He cites three London shows as pivotal in his early life – The Wonder Stuff at Brixton Academy, Energy Orchard at The Borderline and Pete Wylie & The Mighty Wah! at Subterranea. “I hung out too long after the Pete Wylie gig

and missed my last train so had to sleep in the station,” he recalls. “I got through it.” Going to Reading University – chosen in part due to its proximity to the Reading Festival – to study human geography in 1991 was where live music really started to dominate Zapp’s life. “I went to loads of shows,” he says. “I was the kid who went to nearly every indie or rock show there was and bought the T-shirt. I saw Paris Angels and there were about 97 people there. I went up to them after and apologised that it was not busier without realising that was probably the average of what a band with a #1 indie hit at the time did.” Positions came up in the student entertainment (ents) committee and Zapp stood for election, winning the job and surprising himself, but this did not go down well with the ents manager who was personally backing another candidate. “On the night of the election, I was walking down the corridor, obviously very happy I had won, and one of his crew punched me in the stomach,” Zapp says. “That was a moment that was less than savoury.” Undeterred, he took to the job with relish, but one of his initial tasks was to cancel two shows due to prior mismanagement that saw the student union run up debts of £500,000. “The first thing I had to do running the ents department as a student was call up Paul Boswell and cancel a Pop Will Eat Itself show and I also had to cancel an EMF