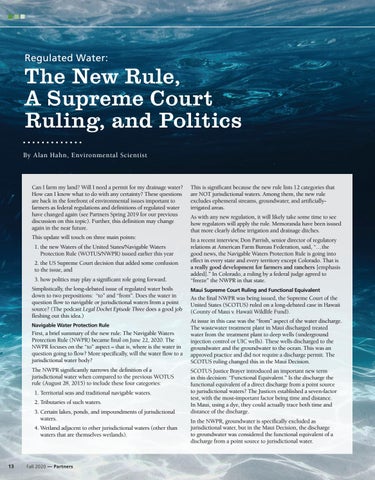 Can I farm my land? Will I need a permit for my drainage water? How can I know what to do with any certainty? These questions are back in the forefront of environmental issues important to farmers as federal regulations and definitions of regulated water have changed again (see Partners Spring 2019 for our previous discussion on this topic). Further, this definition may change again in the near future.

This is significant because the new rule lists 12 categories that are NOT jurisdictional waters. Among them, the new rule excludes ephemeral streams, groundwater, and artificiallyirrigated areas.

This update will touch on three main points:

In a recent interview, Don Parrish, senior director of regulatory relations at American Farm Bureau Federation, said, “…the good news, the Navigable Waters Protection Rule is going into effect in every state and every territory except Colorado. That is a really good development for farmers and ranchers [emphasis added].” In Colorado, a ruling by a federal judge agreed to “freeze” the NWPR in that state.

1. the new Waters of the United States/Navigable Waters Protection Rule (WOTUS/NWPR) issued earlier this year 2. the US Supreme Court decision that added some confusion to the issue, and 3. how politics may play a significant role going forward. Simplistically, the long-debated issue of regulated water boils down to two prepositions: “to” and “from”. Does the water in question flow to navigable or jurisdictional waters from a point source? (The podcast Legal Docket Episode Three does a good job fleshing out this idea.) Navigable Water Protection Rule

First, a brief summary of the new rule: The Navigable Waters Protection Rule (NWPR) became final on June 22, 2020. The NWPR focuses on the “to” aspect – that is, where is the water in question going to flow? More specifically, will the water flow to a jurisdictional water body? The NWPR significantly narrows the definition of a jurisdictional water when compared to the previous WOTUS rule (August 28, 2015) to include these four categories: 1. Territorial seas and traditional navigable waters. 2. Tributaries of such waters. 3. Certain lakes, ponds, and impoundments of jurisdictional waters. 4. Wetland adjacent to other jurisdictional waters (other than waters that are themselves wetlands).

As with any new regulation, it will likely take some time to see how regulators will apply the rule. Memoranda have been issued that more clearly define irrigation and drainage ditches.

As the final NWPR was being issued, the Supreme Court of the United States (SCOTUS) ruled on a long-debated case in Hawaii (County of Maui v. Hawaii Wildlife Fund). At issue in this case was the “from” aspect of the water discharge. The wastewater treatment plant in Maui discharged treated water from the treatment plant to deep wells (underground injection control or UIC wells). These wells discharged to the groundwater and the groundwater to the ocean. This was an approved practice and did not require a discharge permit. The SCOTUS ruling changed this in the Maui Decision. SCOTUS Justice Brayer introduced an important new term in this decision: “Functional Equivalent.” Is the discharge the functional equivalent of a direct discharge from a point source to jurisdictional waters? The Justices established a seven-factor test, with the most-important factor being time and distance. In Maui, using a dye, they could actually trace both time and distance of the discharge. In the NWPR, groundwater is specifically excluded as jurisdictional water, but in the Maui Decision, the discharge to groundwater was considered the functional equivalent of a discharge from a point source to jurisdictional water. 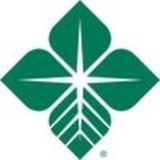