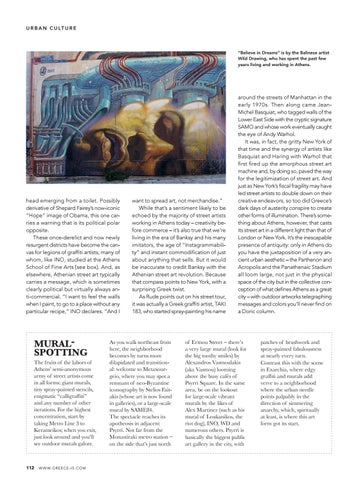 “Believe in Dreams” is by the Balinese artist Wild Drawing, who has spent the past few years living and working in Athens.

head emerging from a toilet. Possibly derivative of Shepard Fairey’s now-iconic “Hope” image of Obama, this one carries a warning that is its political polar opposite. These once-derelict and now newly resurgent districts have become the canvas for legions of graffiti artists, many of whom, like INO, studied at the Athens School of Fine Arts [see box]. And, as elsewhere, Athenian street art typically carries a message, which is sometimes clearly political but virtually always anti-commercial. “I want to feel the walls when I paint, to go to a place without any particular recipe,” INO declares. “And I

MURALSPOTTING The fruits of the labors of Athens’ semi-anonymous army of street artists come in all forms: giant murals, tiny spray-painted stencils, enigmatic “calligraffiti” and any number of other iterations. For the highest concentration, start by taking Metro Line 3 to Kerameikos; when you exit, just look around and you’ll see outdoor murals galore.

want to spread art, not merchandise.” While that’s a sentiment likely to be echoed by the majority of street artists working in Athens today – creativity before commerce – it’s also true that we’re living in the era of Banksy and his many imitators, the age of “Instagrammability” and instant commodification of just about anything that sells. But it would be inaccurate to credit Banksy with the Athenian street art revolution. Because that compass points to New York, with a surprising Greek twist. As Rude points out on his street tour, it was actually a Greek graffiti artist, TAKI 183, who started spray-painting his name

As you walk northeast from here, the neighborhood becomes by turns more dilapidated and transitional: welcome to Metaxourgeio, where you may spot a remnant of neo-Byzantine iconography by Stelios Faitakis (whose art is now found in galleries), or a large-scale mural by SAME84. The spectacle reaches its apotheosis in adjacent Psyrri. Not far from the Monastiraki metro station – on the side that’s just north

around the streets of Manhattan in the early 1970s. Then along came JeanMichel Basquiat, who tagged walls of the Lower East Side with the cryptic signature SAMO and whose work eventually caught the eye of Andy Warhol. It was, in fact, the gritty New York of that time and the synergy of artists like Basquiat and Haring with Warhol that first fired up the amorphous street art machine and, by doing so, paved the way for the legitimization of street art. And just as New York’s fiscal fragility may have led street artists to double down on their creative endeavors, so too did Greece’s dark days of austerity conspire to create other forms of illumination. There’s something about Athens, however, that casts its street art in a different light than that of London or New York. It’s the inescapable presence of antiquity: only in Athens do you have the juxtaposition of a very ancient urban aesthetic – the Parthenon and Acropolis and the Panathenaic Stadium all loom large, not just in the physical space of the city but in the collective conception of what defines Athens as a great city – with outdoor artworks telegraphing messages and colors you’ll never find on a Doric column.

of Ermou Street – there’s a very large mural (look for the big toothy smiles) by Alexandros Vasmoulakis (aka Vasmou) looming above the busy cafés of Psyrri Square. In the same area, be on the lookout for large-scale vibrant murals by the likes of Alex Martinez (such as his mural of Loukanikos, the riot dog), INO, WD and numerous others. Psyrri is basically the biggest public art gallery in the city, with

patches of brushwork and spray-painted fabulousness at nearly every turn. Contrast this with the scene in Exarchia, where edgy graffiti and murals add verve to a neighborhood where the urban needle points palpably in the direction of simmering anarchy, which, spiritually at least, is where this art form got its start. 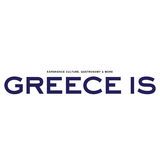 More from GREECE IS