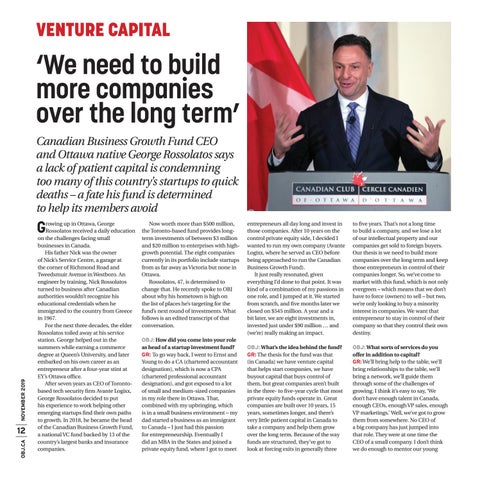 rowing up in Ottawa, George Rossolatos received a daily education on the challenges facing small businesses in Canada. His father Nick was the owner of Nick’s Service Centre, a garage at the corner of Richmond Road and Tweedsmuir Avenue in Westboro. An engineer by training, Nick Rossolatos turned to business after Canadian authorities wouldn’t recognize his educational credentials when he immigrated to the country from Greece in 1967. For the next three decades, the elder Rossolatos toiled away at his service station. George helped out in the summers while earning a commerce degree at Queen’s University, and later embarked on his own career as an entrepreneur after a four-year stint at EY’s Ottawa office. After seven years as CEO of Torontobased tech security firm Avante Logixx, George Rossolatos decided to put his experience to work helping other emerging startups find their own paths to growth. In 2018, he became the head of the Canadian Business Growth Fund, a national VC fund backed by 13 of the country’s largest banks and insurance companies.

Now worth more than $500 million, the Toronto-based fund provides longterm investments of between $3 million and $20 million to enterprises with highgrowth potential. The eight companies currently in its portfolio include startups from as far away as Victoria but none in Ottawa. Rossolatos, 47, is determined to change that. He recently spoke to OBJ about why his hometown is high on the list of places he’s targeting for the fund’s next round of investments. What follows is an edited transcript of that conversation. OBJ: How did you come into your role as head of a startup investment fund? GR: To go way back, I went to Ernst and Young to do a CA (chartered accountant designation), which is now a CPA (chartered professional accountant designation), and got exposed to a lot of small and medium-sized companies in my role there in Ottawa. That, combined with my upbringing, which is in a small business environment –​ my dad started a business as an immigrant to Canada –​ I just had this passion for entrepreneurship. Eventually I did an MBA in the States and joined a private equity fund, where I got to meet

entrepreneurs all day long and invest in those companies. After 10 years on the control private equity side, I decided I wanted to run my own company (Avante Logixx, where he served as CEO before being approached to run the Canadian Business Growth Fund). It just really resonated, given everything I’d done to that point. It was kind of a combination of my passions in one role, and I jumped at it. We started from scratch, and five months later we closed on $545 million. A year and a bit later, we are eight investments in, invested just under $90 million … and (we’re) really making an impact.

to five years. That’s not a long time to build a company, and we lose a lot of our intellectual property and our companies get sold to foreign buyers. Our thesis is we need to build more companies over the long term and keep those entrepreneurs in control of their companies longer. So, we’ve come to market with this fund, which is not only evergreen – which means that we don’t have to force (owners) to sell – but two, we’re only looking to buy a minority interest in companies. We want that entrepreneur to stay in control of their company so that they control their own destiny.

OBJ: What’s the idea behind the fund? GR: The thesis for the fund was that (in Canada) we have venture capital that helps start companies, we have buyout capital that buys control of them, but great companies aren’t built in the three- to five-year cycle that most private equity funds operate in. Great companies are built over 10 years, 15 years, sometimes longer, and there’s very little patient capital in Canada to take a company and help them grow over the long term. Because of the way funds are structured, they’ve got to look at forcing exits in generally three

OBJ: What sorts of services do you offer in addition to capital? GR: We’ll bring help to the table, we’ll bring relationships to the table, we’ll bring a network, we’ll guide them through some of the challenges of growing. I think it’s easy to say, ‘We don’t have enough talent in Canada, enough CEOs, enough VP sales, enough VP marketings.’ Well, we’ve got to grow them from somewhere. No CEO of a big company has just jumped into that role. They were at one time the CEO of a small company. I don’t think we do enough to mentor our young