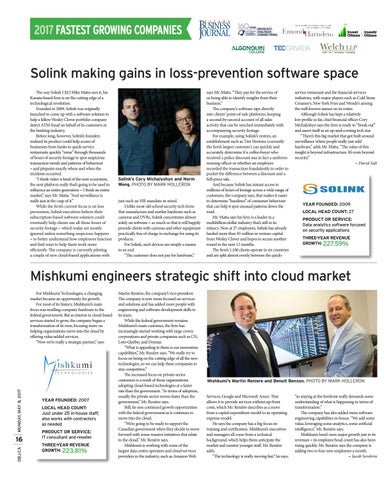 Solink making gains in loss-prevention software space The way Solink CEO Mike Matta sees it, his Kanata-based firm is on the cutting edge of a technological revolution. Founded in 2009, Solink was originally launched to come up with a software solution to help a fellow Wesley Clover portfolio company detect ATM fraud on behalf of its customers in the banking industry. Before long, however, Solink’s founders realized its product could help scores of businesses from banks to quick-service restaurants quickly “mine” through thousands of hours of security footage to spot suspicious transaction trends and patterns of behaviour – and pinpoint exactly where and when the incidents occurred. “I think video is kind of the next ecosystem, the next platform really that’s going to be used to influence an entire generation – I think an entire market,” says Mr. Matta. “And surveillance is really just at the cusp of it.” While the firm’s current focus is on loss prevention, Solink executives believe their subscription-based software solution could eventually help clients use all those hours of security footage – which today are mostly ignored unless something suspicious happens – to better understand how employees function and find ways to help them work more efficiently. The company is currently piloting a couple of new cloud-based applications with

just such an HR mandate in mind. Unlike most old-school security tech firms that manufacture and market hardware such as cameras and DVRs, Solink concentrates almost solely on software – so much so that it will happily provide clients with cameras and other equipment practically free of charge in exchange for using its products. For Solink, such devices are simply a means to an end. “The customer does not pay for hardware,”

says Mr. Matta. “They pay for the service of us being able to identify insights from their business.” The company’s software taps directly into clients’ point-of-sale platforms, keeping a second-by-second account of all sales activity that can be synched immediately with accompanying security footage. For example, using Solink’s system, an establishment such as Tim Hortons (currently the firm’s largest customer) can quickly and accurately determine if a coffee-buyer who received a police discount was in fact a uniformwearing officer or whether an employee recorded the transaction fraudulently in order to pocket the difference between a discount and a full-price sale. And because Solink has instant access to millions of hours of footage across a wide range of customers, the company says, that makes it easier to determine “baselines” of consumer behaviour that can help it spot unusual patterns down the road. Mr. Matta says his firm is a leader in a multibillion-dollar industry that’s still in its infancy. Now at 27 employees, Solink has already landed more than $5 million in venture capital from Wesley Clover and hopes to secure another round in the next 12 months. The firm’s 1,100 clients operate in six countries and are split almost evenly between the quick-

service restaurant and the financial services industries, with major players such as Cold Stone Creamery, New York Fries and Wendy’s among the well-known names on its roster. Although Solink has kept a relatively low profile so far, chief financial officer Cory Michalyshyn says the firm is ready to “break out” and assert itself as an up-and-coming tech star. “There’s this big market that got built around surveillance where people really just sold hardware,” adds Mr. Matta. “The value of this insight is beyond infrastructure. It’s even beyond security.” – David Sali

For Mishkumi Technologies, a changing market became an opportunity for growth. For most of its history, Mishkumi’s main focus was reselling computer hardware to the federal government. But as interest in cloud-based services started to grow, the company began a transformation of its own, focusing more on helping organizations move into the cloud by offering value-added services. “Now we’re really a strategic partner,” says

Martin Renière, the company’s vice-president. The company is now more focused on services and solutions and has added more people with engineering and software development skills to its team. While the federal government remains Mishkumi’s main customer, the firm has increasingly started working with large crown corporations and private companies such as CN, Loto-Québec and Domtar. “What is appealing to them is our innovation capabilities,” Mr. Renière says. “We really try to focus on being on the cutting edge of all the new technologies, so we can help these companies to stay competitive.” The increased focus on private-sector customers is a result of those organizations adopting cloud-based technologies at a faster rate than the government. “In terms of adoption, usually the private sector moves faster than the government,” Mr. Renière says. Still, he sees continued growth opportunities with the federal government as it continues to move into the cloud. “We’re going to be ready to support the Canadian government when they decide to move forward with some massive initiatives that relate to the cloud,” Mr. Renière says. Mishkumi is working with some of the largest data centre operators and cloud-services providers in the industry, such as Amazon Web

Mishkumi’s Martin Reniere and Benoit Benson. PHOT0 BY MARK HOLLERON Services, Google and Microsoft Azure. That allows it to provide services without up-front costs, which Mr. Renière describes as a move from a capital expenditure model to an operating expense model. He says the company has a big focus on training and certification. Mishkumi’s executives and managers all come from a technical background, which helps them anticipate the market and mentor younger staff, Mr. Renière adds. “The technology is really moving fast,” he says,

“so staying at the forefront really demands some understanding of what is happening in terms of transformation.” The company has also added more software engineering capabilities in-house. “We add some value, leveraging some analytics, some artificial intelligence,” Mr. Renière says. Mishkumi hasn’t seen major growth just in its revenues – its employee head count has also been rising quickly. Mr. Renière says the company is adding two to four new employees a month. – Jacob Serebrin