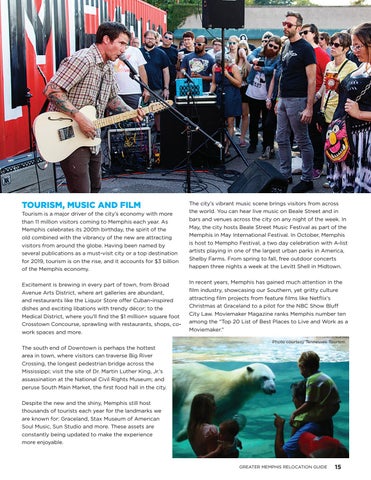 Tourism is a major driver of the city’s economy with more than 11 million visitors coming to Memphis each year. As Memphis celebrates its 200th birthday, the spirit of the old combined with the vibrancy of the new are attracting visitors from around the globe. Having been named by several publications as a must-visit city or a top destination for 2019, tourism is on the rise, and it accounts for $3 billion of the Memphis economy.

The city’s vibrant music scene brings visitors from across the world. You can hear live music on Beale Street and in bars and venues across the city on any night of the week. In May, the city hosts Beale Street Music Festival as part of the Memphis in May International Festival. In October, Memphis is host to Mempho Festival, a two day celebration with A-list artists playing in one of the largest urban parks in America, Shelby Farms. From spring to fall, free outdoor concerts happen three nights a week at the Levitt Shell in Midtown.

Excitement is brewing in every part of town, from Broad Avenue Arts District, where art galleries are abundant, and restaurants like the Liquor Store offer Cuban-inspired dishes and exciting libations with trendy décor; to the Medical District, where you’ll find the $1 million+ square foot Crosstown Concourse, sprawling with restaurants, shops, cowork spaces and more.

In recent years, Memphis has gained much attention in the film industry, showcasing our Southern, yet gritty culture attracting film projects from feature films like Netflix’s Christmas at Graceland to a pilot for the NBC Show Bluff City Law. Moviemaker Magazine ranks Memphis number ten among the “Top 20 List of Best Places to Live and Work as a Moviemaker.” Photo courtesy Tennessee Tourism.

The south end of Downtown is perhaps the hottest area in town, where visitors can traverse Big River Crossing, the longest pedestrian bridge across the Mississippi; visit the site of Dr. Martin Luther King, Jr.’s assassination at the National Civil Rights Museum; and peruse South Main Market, the first food hall in the city. Despite the new and the shiny, Memphis still host thousands of tourists each year for the landmarks we are known for: Graceland, Stax Museum of American Soul Music, Sun Studio and more. These assets are constantly being updated to make the experience more enjoyable. 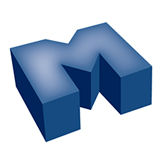