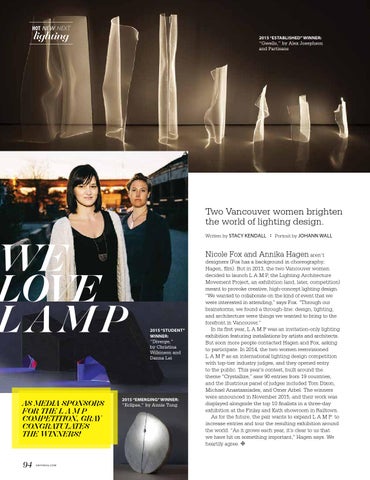 “Gweilo,” by Alex Josephson and Partisans

WE LOVE LAMP AS MEDIA SPONSORS FOR THE L A M P COMPETITION, GRAY CONGRATULATES THE WINNERS!

Nicole Fox and Annika Hagen aren’t designers (Fox has a background in choreography; Hagen, film). But in 2013, the two Vancouver women decided to launch L A M P, the Lighting Architecture Movement Project, an exhibition (and, later, competition) meant to provoke creative, high-concept lighting design. “We wanted to collaborate on the kind of event that we were interested in attending,” says Fox. “Through our brainstorms, we found a through-line: design, lighting, and architecture were things we wanted to bring to the forefront in Vancouver.” In its first year, L A M P was an invitation-only lighting exhibition featuring installations by artists and architects. But soon more people contacted Hagen and Fox, asking to participate. In 2014, the two women reenvisioned L A M P as an international lighting design competition with top-tier industry judges, and they opened entry to the public. This year’s contest, built around the theme “Crystallize,” saw 90 entries from 19 countries, and the illustrious panel of judges included Tom Dixon, Michael Anastassiades, and Omer Arbel. The winners were announced in November 2015, and their work was displayed alongside the top 10 finalists in a three-day exhibition at the Finlay and Kath showroom in Railtown. As for the future, the pair wants to expand L A M P: to increase entries and tour the resulting exhibition around the world. “As it grows each year, it’s clear to us that we have hit on something important,” Hagen says. We heartily agree. h