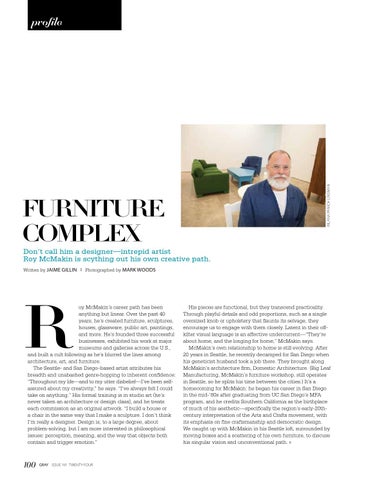 Don’t call him a designer—intrepid artist Roy McMakin is scything out his own creative path. Written by JAIME GILLIN : Photographed by MARK WOODS

oy McMakin’s career path has been anything but linear. Over the past 40 years, he’s created furniture, sculptures, houses, glassware, public art, paintings, and more. He’s founded three successful businesses, exhibited his work at major museums and galleries across the U.S., and built a cult following as he’s blurred the lines among architecture, art, and furniture. The Seattle- and San Diego–based artist attributes his breadth and unabashed genre-hopping to inherent confidence: “Throughout my life—and to my utter disbelief—I’ve been selfassured about my creativity,” he says. “I’ve always felt I could take on anything.” His formal training is in studio art (he’s never taken an architecture or design class), and he treats each commission as an original artwork. “I build a house or a chair in the same way that I make a sculpture. I don’t think I’m really a designer. Design is, to a large degree, about problem-solving, but I am more interested in philosophical issues: perception, meaning, and the way that objects both contain and trigger emotion.”

His pieces are functional, but they transcend practicality. Through playful details and odd proportions, such as a single oversized knob or upholstery that flaunts its selvage, they encourage us to engage with them closely. Latent in their offkilter visual language is an affective undercurrent—“They’re about home, and the longing for home,” McMakin says. McMakin’s own relationship to home is still evolving. After 20 years in Seattle, he recently decamped for San Diego when his geneticist husband took a job there. They brought along McMakin’s architecture firm, Domestic Architecture. (Big Leaf Manufacturing, McMakin’s furniture workshop, still operates in Seattle, so he splits his time between the cities.) It’s a homecoming for McMakin: he began his career in San Diego in the mid-’80s after graduating from UC San Diego’s MFA program, and he credits Southern California as the birthplace of much of his aesthetic—specifically the region’s early-20thcentury interpretation of the Arts and Crafts movement, with its emphasis on fine craftsmanship and democratic design. We caught up with McMakin in his Seattle loft, surrounded by moving boxes and a scattering of his own furniture, to discuss his singular vision and unconventional path. »