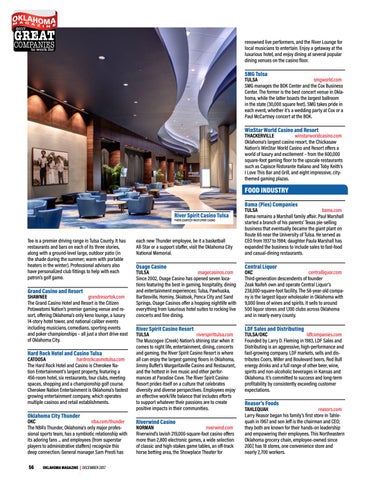 renowned live performers, and the River Lounge for local musicians to entertain. Enjoy a getaway at the luxurious hotel, and enjoy dining at several popular dining venues on the casino floor.

TULSA smgworld.com SMG manages the BOK Center and the Cox Business Center. The former is the best concert venue in Oklahoma, while the latter boasts the largest ballroom in the state (30,000 square feet). SMG takes pride in each event, whether it’s a wedding party at Cox or a Paul McCartney concert at the BOK.

THACKERVILLE winstarworldcasino.com Oklahoma’s largest casino resort, the Chickasaw Nation’s WinStar World Casino and Resort oﬀers a world of luxury and excitement – from the 600,000 square-foot gaming floor to the upscale restaurants such as Capisce Ristorante Italiano and Toby Keith’s I Love This Bar and Grill, and eight impressive, citythemed gaming plazas.

each new Thunder employee, be it a basketball All-Star or a support staﬀer, visit the Oklahoma City National Memorial.

TULSA bama.com Bama remains a Marshall family aﬀair. Paul Marshall started a branch of his parents’ Texas pie-selling business that eventually became the giant plant on Route 66 near the University of Tulsa. He served as CEO from 1937 to 1984; daughter Paula Marshall has expanded the business to include sales to fast-food and casual-dining restaurants.

Tee is a premier driving range in Tulsa County. It has restaurants and bars on each of its three stories, along with a ground-level large, outdoor patio (in the shade during the summer; warm with portable heaters in the winter). Professional advisers also have personalized club fittings to help with each patron’s golf game.

OKC nba.com/thunder The NBA’s Thunder, Oklahoma’s only major professional sports team, has a symbiotic relationship with its adoring fans ... and employees (from superstar players to administrative staﬀers) recognize this deep connection. General manager Sam Presti has

TULSA osagecasinos.com Since 2002, Osage Casino has opened seven locations featuring the best in gaming, hospitality, dining and entertainment experiences: Tulsa, Pawhuska, Bartlesville, Hominy, Skiatook, Ponca City and Sand Springs. Osage Casinos oﬀer a hopping nightlife with everything from luxurious hotel suites to rocking live concerts and fine dining. TULSA riverspirittulsa.com The Muscogee (Creek) Nation’s shining star when it comes to night life, entertainment, dining, concerts and gaming, the River Spirit Casino Resort is where all can enjoy the largest gaming floors in Oklahoma, Jimmy Buﬀet’s Margaritaville Casino and Restaurant, and the hottest in live music and other performances at Paradise Cove. The River Spirit Casino Resort prides itself on a culture that celebrates diversity and diverse perspectives. Employees enjoy an eﬀective work/life balance that includes eﬀorts to support whatever their passions are to create positive impacts in their communities.

OKC centralliquor.com Third-generation descendents of founder Zeak Naifeh own and operate Central Liquor’s 238,000-square-foot facility. The 58-year-old company is the largest liquor wholesaler in Oklahoma with 9,000 lines of wines and spirits. It sells to around 500 liquor stores and 1,100 clubs across Oklahoma and in nearly every county. TULSA/OKC ldfcompanies.com Founded by Larry D. Fleming in 1983, LDF Sales and Distributing is an aggressive, high-performance and fast-growing company. LDF markets, sells and distributes Coors, Miller and Boulevard beers, Red Bull energy drinks and a full range of other beer, wine, spirits and non-alcoholic beverages in Kansas and Oklahoma. It’s committed to success and long-term profitability by consistently exceeding customer expectations.

TAHLEQUAH reasors.com Larry Reasor began his family’s first store in Tahlequah in 1967 and son Jeﬀ is the chairman and CEO; they both are known for their hands-on leadership and empowering their employees. This Northeastern Oklahoma grocery chain, employee-owned since 2007, has 18 stores, one convenience store and nearly 2,700 workers. 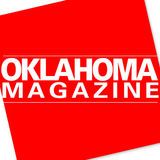