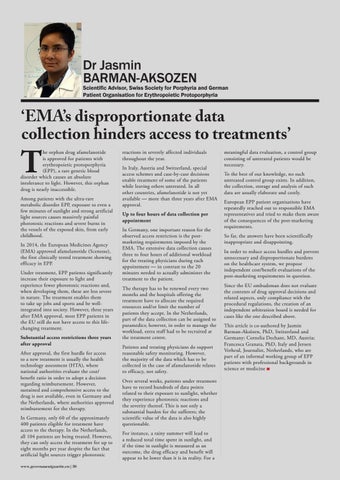 he orphan drug afamelanotide is approved for patients with erythropoietic protoporphyria (EPP), a rare genetic blood disorder which causes an absolute intolerance to light. However, this orphan drug is nearly inaccessible.

Among patients with the ultra-rare metabolic disorder EPP, exposure to even a few minutes of sunlight and strong artificial light sources causes massively painful phototoxic reactions and severe burns in the vessels of the exposed skin, from early childhood. In 2014, the European Medicines Agency (EMA) approved afamelanotide (Scenesse), the first clinically tested treatment showing efficacy in EPP. Under treatment, EPP patients significantly increase their exposure to light and experience fewer phototoxic reactions and, when developing them, these are less severe in nature. The treatment enables them to take up jobs and sports and be wellintegrated into society. However, three years after EMA approval, most EPP patients in the EU still do not have access to this lifechanging treatment. Substantial access restrictions three years after approval After approval, the first hurdle for access to a new treatment is usually the health technology assessment (HTA), where national authorities evaluate the cost/ benefit ratio in order to adopt a decision regarding reimbursement. However, sustained and comprehensive access to the drug is not available, even in Germany and the Netherlands, where authorities approved reimbursement for the therapy. In Germany, only 60 of the approximately 400 patients eligible for treatment have access to the therapy. In the Netherlands, all 104 patients are being treated. However, they can only access the treatment for up to eight months per year despite the fact that artificial light sources trigger phototoxic www.governmentgazette.eu | 38

reactions in severely affected individuals throughout the year.

In Italy, Austria and Switzerland, special access schemes and case-by-case decisions enable treatment of some of the patients while leaving others untreated. In all other countries, afamelanotide is not yet available — more than three years after EMA approval. Up to four hours of data collection per appointment In Germany, one important reason for the observed access restriction is the postmarketing requirements imposed by the EMA. The extensive data collection causes three to four hours of additional workload for the treating physicians during each appointment — in contrast to the 20 minutes needed to actually administer the treatment to the patient. The therapy has to be renewed every two months and the hospitals offering the treatment have to allocate the required resources and/or limit the number of patients they accept. In the Netherlands, part of the data collection can be assigned to paramedics; however, in order to manage the workload, extra staff had to be recruited at the treatment centre. Patients and treating physicians do support reasonable safety monitoring. However, the majority of the data which has to be collected in the case of afamelanotide relates to efficacy, not safety. Over several weeks, patients under treatment have to record hundreds of data points related to their exposure to sunlight, whether they experience phototoxic reactions and the severity thereof. This is not only a substantial burden for the sufferers; the scientific value of the data is also highly questionable. For instance, a rainy summer will lead to a reduced total time spent in sunlight, and if the time in sunlight is measured as an outcome, the drug efficacy and benefit will appear to be lower than it is in reality. For a

meaningful data evaluation, a control group consisting of untreated patients would be necessary. To the best of our knowledge, no such untreated control group exists. In addition, the collection, storage and analysis of such data are usually elaborate and costly. European EPP patient organisations have repeatedly reached out to responsible EMA representatives and tried to make them aware of the consequences of the post-marketing requirements. So far, the answers have been scientifically inappropriate and disappointing. In order to reduce access hurdles and prevent unnecessary and disproportionate burdens on the healthcare system, we propose independent cost/benefit evaluations of the post-marketing requirements in question. Since the EU ombudsman does not evaluate the contents of drug approval decisions and related aspects, only compliance with the procedural regulations, the creation of an independent arbitration board is needed for cases like the one described above. This article is co-authored by Jasmin Barman-Aksözen, PhD, Switzerland and Germany; Cornelia Dechant, MD, Austria; Francesca Granata, PhD, Italy and Jeroen Verheul, Journalist, Netherlands, who are part of an informal working group of EPP patients with professional backgrounds in science or medicine

The current edition covers some of the most noteworthy digital transformation trends and interconnected regulations, including those relating to General Data Protection Regulation (GDPR) — the draconian data protection regulation, the controversial copyright reform, artificial intelligence (AI), connected vehicles, the state of 5G infrastructure that could potentially make connected mobility a reality, blockchain technologies and cybersecurity. 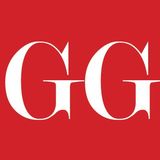