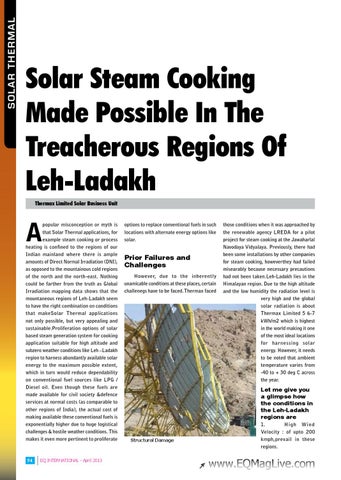 popular misconception or myth is that Solar Thermal applications, for example steam cooking or process heating is confined to the regions of our Indian mainland where there is ample amounts of Direct Normal Irradiation (DNI), as opposed to the mountainous cold regions of the north and the north-east. Nothing could be farther from the truth as Global Irradiation mapping data shows that the mountaneous regions of Leh-Ladakh seem to have the right combination on conditions that makeSolar Thermal applications not only possible, but very appealing and sustainable.Proliferation options of solar based steam generation system for cooking application suitable for high altitude and subzero weather conditions like Leh â&amp;#x20AC;&amp;#x201C;Ladakh region to harness abundantly available solar energy to the maximum possible extent, which in turn would reduce dependability on conventional fuel sources like LPG / Diesel oil. Even though these fuels are made available for civil society &amp;defence services at normal costs (as comparable to other regions of India), the actual cost of making available these conventional fuels is exponentially higher due to huge logistical challenges &amp; hostile weather conditions. This makes it even more pertinent to proliferate

options to replace conventional fuels in such locations with alternate energy options like solar.

Prior Failures and Challenges However, due to the inherently unamicable conditions at these places, certain challenegs have to be faced. Thermax faced

those conditions when it was approached by the renewable agency LREDA for a pilot project for steam cooking at the Jawaharlal Navodaya Vidyalaya. Previously, there had been some installations by other companies for steam cooking, howeverthey had failed misearably because necessary precautions had not been taken.Leh-Ladakh lies in the Himalayan region. Due to the high altitude and the low humidity the radiation level is very high and the global solar radiation is about Thermax Limited 5 6-7 kWh/m2 which is highest in the world making it one of the most ideal locations for harnessing solar energy. However, it needs to be noted that ambient temperature varies from -40 to + 30 deg C across the year.

1. High Wind Velocity : of upto 200 kmph,prevail in these regions.